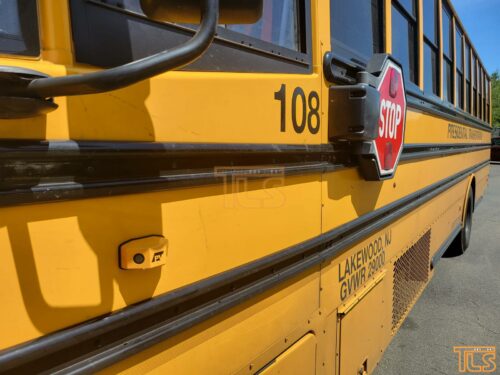 For several years, parents in Lakewood have been urging the Lakewood Board of Education and Township Officials to implements stop-arm cameras, similar to the ones in use in Jackson and other Townships, and it has finally happened.

In a collaborative effort between the Lakewood Board of Education, BOE Attorney Michael Inzelbuch, Superintendent Laura Winters, the LSTA, the Lakewood Police Department and CSO Radio, the first stop-arm camera has been installed.

The camera, which was first installed on a Presidential Bus Service school bus, activates immediately upon the activation of the red lights and stop sign, which means, if the camera caught your license plate, you must have passed a flashing red school bus light.

In 2019, Jackson Township installed such cameras, and has since seen a decrease in incidents.

Each year, 13 children die on average as the result of illegal school bus passing across the nation. Thousands more visit hospitals due to accidents around the bus. Those motorists were either too distracted to notice the flashing red lights or disregarded them.

Here on TLS, multiple jaw-dropping videos have been published over the years showing children nearly killed getting off a school bus – some missed by mere inches. A stop-arm camera will catch such perpetrators and bring the number of such incidents down.

In fact, immediately after launching this first camera, it had already proven itself.

The video, obtained by TLS, shows a bus activating its lights and stop sign, and captures a vehicle passing the stop-arm.

All incidents captured by the cameras will be submitted to the Lakewood Police Department, who will then be issuing a summons.

“There will be a zero tolerance policy for such behavior,” said a Township Official.

More cameras are being installed, and the goal is to equip all school buses throughout the Township with the cameras.