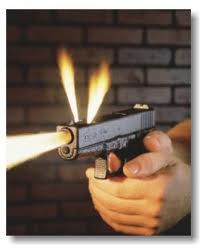 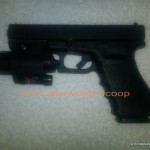 EXCLUSIVE: [PHOTO OF ACTUAL GUN & LASER USED] A burglar attempting to break in to a Frum home was not expecting to be looking straight down the barrel of a gun and begging for his life. The frightening incident occurred at about 4:20 AM this morning when a local resident woke to what he believed was one of his children walking in the hallway.

Realizing it wasn’t, the homeowner got out of bed and started for the stairs.

When he got to the stairs, he noticed the front door handle beginning to turn and headed back to his bedroom. But not to go back to sleep.

He immediately woke his wife while he unlocked the combination to his gun safe under his bed, and told her to call police.

“I told her to tell Police that there’s someone breaking in and that I have a gun”, the homeowner revealed EXCLUSIVELY to TLS.

The homeowner headed down the stairs to the front door and hid behind the door figuring he’d shoot the would-be burglar, should he break-in.

But while waiting behind the door, the homeowner looked into the kitchen and saw the suspect at the sliding door, attempting to make his way in from there.

“FREEZE OR I’LL SHOOT”, the homeowner yelled through the sliding door, while pointing his 45 Caliber Glock at the suspect with the gun’s barrel and laser pointing right at his face.

“YOU MAKE ONE MOVE AND I’LL SHOOT”, the homeowner again yelled, with his finger on the trigger.

Seconds later, a Lakewood Officer with his gun drawn ran up to the burglar and told him to freeze, while the officer held him at gunpoint waiting for backup to arrive.

Once Lakewood Police were on him, the homeowner lowered his weapon and let Police handle the rest.

“Moments later, another officer arrived and put the guy in handcuffs and took him away”, says the homeowner.

Asked if he was nervous, the homeowner tells TLS, “I was actually quite surprised, I remained collective the entire time”. “I played out this scenario in my head many times”, the homeowner says.

The homeowner says he owns several guns, but the Glock used in this incident was purchased just a couple months ago.

The suspect, described as an approximately 20 year-old white male, was arrested and taken into custody.

No charges were filed against the homeowner. TLS.