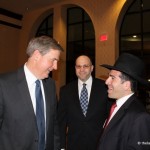 Education commissioner Bret Schundler is scheduled to be quizzed this morning about Gov. Chris Christie’s budget cuts in a hearing devoted exclusively to schools. Schundler, the former mayor of Jersey City, will be asked to explain the administration’s proposal to cut nearly $820 million from state aid to K-12 school districts, which sparked a major and prolonged fight with the state’s largest teachers union, the New Jersey Education Association. The state also lacks more than $1 billion in federal stimulus money it used last year for education.

Christie told schools in mid-February to expect a cut in state aid as large as 15 percent. But because of the distribution of the aid cut – a complicated formula that cut a maximum of 5 percent of a district’s total budget – some schools saw 100 percent of their aid wiped out.

“We’re going to really emphasize a lot on how they derived on these cuts,” Budget Committee Chairman Sen. Paul Sarlo (D-Bergen) said this morning. “Everybody was prepared for a 15 percent cut in their school aid. Why did it change at the 11th hour? Why was there no notice?”

The cuts were not evenly spread out among school districts. Christie said no district, when adjusted for shifts in the student population, was left with more than a 5 percent hole in its total annual budget. But districts that rely more heavily on state aid lost more money, while those that do not use as much aid lost a greater percentage of that help.

Christie said Monday voters should reject the majority of school budgets around the state, where teachers have refused wage freezes. As of Monday, 141 of the state’s roughly 600 school districts had agreed to some type of freeze or reduction, though only 20 involved teachers, according to the governor’s office.

“I just don’t see how citizens should want to support a budget where their teachers have not wanted to be part of the shared sacrifice,” Christie said Monday.

Sarlo called the move an “attack on public education.”

The Republican governor has urged teachers to forgo negotiated raises to save co-workers jobs, school programs and activities such as sports. The teachers union, which represents about 200,000 workers, said it does not control the individual unions, which make decisions district-by-district on whether to re-open contracts.

As budget chairman, Sarlo runs the hearings, which stretch through April and May. Sarlo’s home county of Bergen, with some of the state’s wealthiest districts such as Alpine and Saddle River, was hit particularly hard by the education cuts. More than 30 districts in Bergen County will not receive any aid this year.

The governor’s office has shone the spotlight on school districts where teachers accepted wage freezes, holding press conferences in schools in Boonton and Montclair.

In March, Christie proposed a set of changes he called “tools” to help school districts keep costs down. Executive county superintendents, appointed by the governor, would be required to approve all school district contracts, rejecting those that increase salaries more than a cap property taxes increases. The superintendent would also be directed to reject contracts without a minimum number of work days, and those that do not include a minimum of five hours of “pupil contact” for teachers.

Sarlo said he welcomed some of the changes, but they did not come soon enough. “None of that’s going to affect school districts this year,” he said. Star Ledger