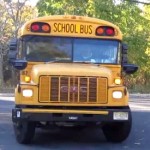 FIRST REPORT: [UPDATED 8:00 AM] TLS has learned that Durham Bus Service has returned 10 bus routes to the District, being unable to service those routes. A Board member tells TLS there are many legal issues they now have to deal with as a result of the sudden change, which will also affect the busing system.

Sources tell TLS, about 400 children this afternoon were left without busing due to the dropped routes, most of them public school routes.

TLS has also learned, that there were at least two other bus companies which were having trouble servicing the routes which they bid on, but ended up accommodating the district. One of those companies’ owners were seen driving a route himself.

An official confirmed to TLS that the Board Of Transportation is currently working on resolving the issue in time for tomorrow’s busing.

UPDATE 11:30 PM Officials tell TLS the district is considering several options which will resolve the issue ‘within days’.

The issue, which still leaves several hundred children without busing at this time, was caused due when the public schools switched their dismissal time from 2:15 PM to 2:45 PM, affecting the 3:00 PM routes, some which include private schools.

UPDATE 8:00 AM. The following was submitted by a School Administrator to TLS, received last night from the District:

I Have Been Asked To Forward This To Your Attention And Was Provided The Attched E-Mail List To Accomplish Same.

Please Be Formally Advised That The District’s Administration, Transportation Staff , And The Board Are Actively Pursuing All Avenues To Address Any And All Issues That Have Arisen With Regard To Transportation , Most Notably , The “no Shows” And Tardiness Of Certain Bus Companies That Have Affected Many Both In The Public And Non Public Sector.

On Behalf Of The Administration And The Board We Sincerely Apologize For Any And All Inconvience This Has Caused To Schools , Parents /guardians , And The Children We Serve. Hoewever, We Fully Appreciate That More Than Just Apologies Are Needed .

Specifically , This Evening Gus And I Have Met Again To Review All Issues And Supporting Documentation And Have Been In Contact With The Superintendent , Lydia Silva, The Board President, Meir Grunhut , And Transportation Chairperson , Isaac Zlatkin . In Addition , The Board’s Transportation Committee Met Earlier Today( At The Request Of Mr Zlatkin) With The Vendors In An Effort To Resolve Any And All Issues In A Proactive And Amicable Fashion . Moreover, Patty Remained At The District This Evening Until Approximately 8 Pm To Assure That Any And All Information Required Was Collected .

Unfortunately , It Appears That Despite The Best Efforts Of All Involved Further Steps Will Need To Be Taken And Will Be Taken Pending A Review Of The Situation And Board Approval . In The Interim There Will Be “problems”

Please Continue To Report Any And All Issues To Gus And Patty So We Can Have The Factual Support We Need To Win … Win Meaning Getting Our Kids—-Public And Non -Public— To And From School In A Safe And Timely Manner .

Thanking You For Educating Our Future And Understanding That The Board , Transportation Staff , And Administration Will Not Stop Until We Get What You Deserve.

While The Avenues Of Redress Are Being Actively Pursued Please Be Formally Advised That There In All Likelihood Will Continue To Be Issues. Please Notify Gus Or Patty In Writing So The Board Has Ample Evidence To Pursue This Matter In The Appropriate Legal Forum .