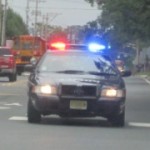 The woman was stopped by police, who reportedly issued her a summons for inappropriately picking up a passenger in the roadway, and causing a traffic hazard.

As for the hitchhiker, the statue (title :39) provides that they have to be in the roadway in order to be in violation of the law. Standing on the sidewalk or on the curb is permitted.

It’s unknown if the hitchhiker in this incident was ticketed. TLS-89/TLS-PK.