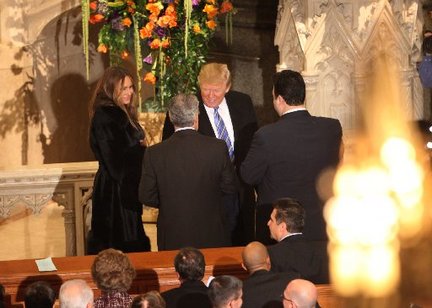 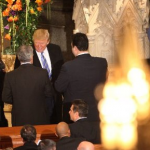 Real estate and entertainment mogul Donald Trump said after an inaugural mass for Gov.-elect Chris Christie this morning the incoming governor was a “talented, talented man” who will turn out to be the state’s “greatest governor.” “He’s going to be a great governor,” he said. “He will make this state the hottest state in the country. I’m a big fan. I’ve known him for a long time.” Trumps casino company is one of N.J.’s larger employers and a critical presence in Atlantic City, operating three landmark hotels and gambling parlors. Trump said Christie would adeptly handle the state’s challenges, such as a structural budget deficit estimated between $8 billion and $9.5 billion. “He will really do a job in straightening out New Jersey,” he said. “He will turn it around.”

Trump said he would not comment on outgoing Gov. Jon Corzine’s job performance.

Hundreds gathered for the invitation-only Mass under the soaring ceiling of the Cathedral Basilica of the Sacred Heart, the mother church for the area’s Catholic archdiocese. Christie will take the oath of office at the War Memorial in Trenton at noon. Star Ledger.