Do Nixon’s Comments Suggest Something More Nefarious? (AUDIO) | A. Webley 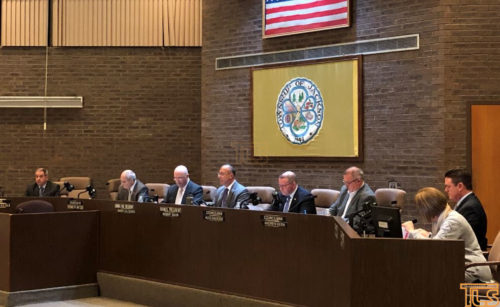 Following our previous article which illustrated Jackson Council President Rob Nixon’s apparent contradiction of statements regarding his authority to insert items on the Jackson Township Council agenda on short notice, I have received multiple tips regarding other, more concerning behavior by the Council President. The following is one of several days that will be released in the coming days and weeks.

During a Jackson Township Council meeting held on April 12 of 2016, in response to a resident’s complaint of changing demographics in Jackson, Nixon mentioned that there were several ways in which he wanted to “attack” the issue. To be clear, the “issue” is that Jews are moving into Jackson. Although he declined to publicly state what his plans were, he did say that the Township’s attorney had to “reel him back” as his proposals were illegal. Nixon told the resident that he would prefer to speak “off the mic” regarding his and others’ complaints of Jews settling in Jackson’s borders. Here is the relevant audio from that meeting:

What arises from Nixon’s comments during the meeting are questions over what exactly Nixon was referring to when he said the Township attorney had to stop him, and furthermore, what proposals did he have that were so controversial that he would only talk about them “off the mic”?

Curiously, the minutes of that meeting omitted Jackson’s “attack” comments. Did Nixon have them purged from the minutes, feeling that he has said too much publicly and should have kept his ideas of “attack” to an “off the mic” conversation? The particulars of the incident seem fishy at best.

Several theories have emerged as to what Nixon was referring to when he made his “attack” comments. Primary, and most concerning among them is the possibility that Nixon was behind a proposal to ban assemblies in Jackson. Such an ordinance would have effectively made it illegal for Jews to gather for prayers. While the resolution had been drafted, it was never placed before the Jackson Township Council. Was banning prayers one of Nixon’s ideas to “attack”, on which the Township attorney had to “reel him back” on? Such a resolution is unquestionable unconstitutional and would have been overturned by a judge. Did the attorney warn Nixon that such a proposal was illegal and would never be implemented?

Is Nixon attempting to enact ordinances to keep Jews out of Jackson? Does the PBA, who he is a lobbyist for, know of his actions? And is the university he works at aware of the same? While much is still up to speculation, Council President Nixon’s comments and behavior are worrisome and warrant further scrutiny.