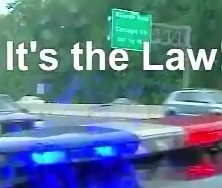 On the four-year anniversary of the death of New Jersey State Police Trooper Marc Castellano, the Division of Highway Traffic Safety and Division of State Police are reminding motorists to obey the State’s Move Over Law, which requires drivers to slow down and, if safe, move over a lane when they see flashing emergency lights on the roadside.

Castellano was struck and killed by a motorist on June 6, 2010 while responding to a roadside emergency on Interstate 195 in Monmouth County. That motorist veered onto the road’s shoulder and hit the 29-year-old married father of two.

Division of Highway Traffic Safety Acting Director Gary Poedubicky said the law requires drivers approaching stationary emergency vehicles, tow trucks and other highway safety vehicles that display red, blue and/or amber flashing lights to move over one lane or, if not safe to move over, then slow down below the posted speed limit. Failing to obey the law can result in fines of up to $500. Castellano’s death came little more than a year after the Move Over Law went into effect in New Jersey.

“The purpose of this law is to help those who help us,” Poedubicky said. “Though it would seem like common sense to approach flashing emergency lights with caution, it is important to remind people that their legal responsibility in that situation is slow down and, if safe, move over. Proceeding with care will make the roadside, which is an extremely dangerous place to do one’s job, safer for those called to respond there.

Since his death, Castellano’s mother, Donna Setaro, of Forked River, has set out on a one-woman mission to raise awareness of the Move Over Law and the dangers roadside responders face. She started the M.A.R.C. campaign (Move Over AwaReness Campaign) in 2011 to educate the public about the Move Over Law and has thus far spoken to 40,000 New Jersey drivers in 302 presentations. In 2012, Setaro’s story was featured as part of a package of public service announcements produced by the Divisions of Highway Traffic Safety and State Police. Those videos can be seen at moveoverlaw.com. Last year, Setaro secured the placement of 26 Department of Transportation static road signs that will notify motorists of the requirements of the law.

“We will never know if more awareness would have prevented the crash that took my son’s life,” Setaro said. “But since then, I have made it my mission to educate the public about this law, save lives and make M.A.R.C. a household phrase just like “Click it or Ticket” and “Drive Sober, or Get Pulled Over.”

The State Police have teamed up with Setaro since M.A.R.C.’s inception and the agency has pledged to continue to help her get the word out.

“New Jersey motorists must be aware that moving over for emergency vehicles is a law in this state as it is in many other states. We need to educate drivers on the importance of moving over, and that it will save lives,” said Lt. Col. Edward Cetnar, Deputy Superintendent of the New Jersey State Police. “Move over and give our troopers and emergency responders one less thing to worry about.” [TLS]