Distraction and Teen Crashes: Even Worse than We Thought, Says AAA 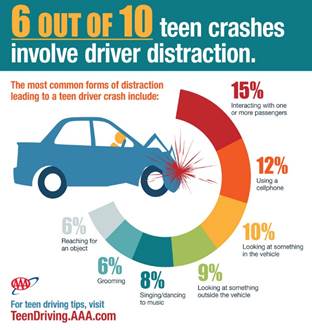 The most comprehensive research ever conducted into crash videos of teen drivers has found significant evidence that distracted driving is likely much more serious a problem than previously known, according to the AAA Foundation for Traffic Safety. The unprecedented video analysis finds that distraction was a factor in nearly 6 out of 10 moderate-to-severe teen crashes, which is four times as many as official estimates based on police reports.

“Access to crash videos has allowed us to better understand the moments leading up to a vehicle impact in a way that was previously impossible,” said Tracy Noble, spokesperson for AAA Mid-Atlantic. “The in-depth analysis provides indisputable evidence that teen drivers are distracted in a much greater percentage of crashes than we previously realized.”  To view the videos click here.

“It is troubling that passengers and cell phones were the most common forms of distraction given that these factors can increase crash risks for teen drivers,” Noble added.   “The situation is made worse by the fact that young drivers have spent less time behind the wheel and cannot draw upon their previous experience to manage unsafe conditions.”

Researchers found that drivers manipulating their cell phone (includes calling, texting or other uses), had their eyes off the road for an average of 4.1 out of the final six seconds leading up to a crash. The researchers also measured reaction times in rear-end crashes and found that teen drivers using a cell phone failed to react more than half of the time before the impact, meaning  they crashed without braking or steering.

“This study shows how important it is for states to have an all-encompassing graduated driver licensing law to ensure teens are provided as much protection as possible,” continued Noble. “While New Jersey has increased GDL restrictions in a number of areas, it is one of only four states that does not require practice hours prior to full licensure.”

Parents play a critical role in preventing distracted driving. AAA recommends that parents teach teens about the dangers of cell phone use and restrict passengers during the learning-to-drive process.  Before parents begin practice driving with teens, they should create a parent-teen driving agreement that includes strict ground rules related to distraction. AAA offers a comprehensive driver education program, where teens can learn specifically how using a cell phone affects driving abilities and increases their crash risk. For more information, visit TeenDriving.AAA.com.​

Teens have the highest crash rate of any group in the United States. About 963,000 drivers age 16-19 were involved in police-reported crashes in 2013, which is the most recent year of available data. These crashes resulted in 383,000 injuries and 2,865 deaths.

The full research report and b-roll video of teen driver crashes is available on the Foundation’s website. The Foundation partnered with researchers at the University of Iowa to conduct this study.

Lytx™, Inc., a global leader in video-based driver safety technology using in-vehicle event recorders, provided the collision videos. The Lytx DriveCam program collects video, audio and accelerometer data when a driver triggers an in-vehicle device by hard braking, fast cornering or an impact that exceeds a certain g-force. Each video is 12-seconds long and provides information from before and after the trigger. The videos are used in the DriveCam Program for coaching drivers to improve behavior and reduce collisions.

Established by AAA in 1947, the AAA Foundation for Traffic Safety is a 501(c)(3) not-for-profit, publicly-supported charitable educational and research organization. Dedicated to saving lives and reducing injuries on our roads, the Foundation’s mission is to prevent crashes and save lives through research and education about traffic safety. The Foundation has funded over 200 research projects designed to discover the causes of traffic crashes, prevent them and minimize injuries when they do occur.  Visit www.AAAFoundation.org for more information on this and other research.