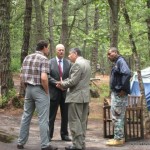 [UPDATED] [VIDEO Of Police Chief Lawson & Senator Singer Touring Tent City] As part of an agreement in a pending lawsuit filed against Tent City residents, Tent City are being forced to take down 15 structures, Deputy Mayor Steven Langert confirmed to TLS. The lawsuit filed last year in an attempt to evict the homeless, gave the homeless some time to argue their case and why the County should be required to continue to house them.

In July, 2009, Senator and then Mayor Bob Singer and Police Chief Rob Lawson together with Fair Housing Officer Mike McNeil of STEPS visited Tent City in an effort to work with the homeless and ultimately find permanent housing for them

“We want to work with them and not bang heads”, Singer said then. “We will bring this thing to an end – we understand their circumstances and are trying to work with them to find them proper accommodations” he said.

But Singer made it clear to Minister Steven Brigham back then, “that if there is any growth in this camp-it will be ended promptly”.

There have been multiple fires in Tent City over the years, including one which killed on of its residents last year, and severely injured another.

Shortly afterwards, the lawsuit was filed.

The following consent order obatined by TLS, was the court orders following the lawsuit’s filing: By consent order issued by Judge Grasso on July 15, 2010 between the Township, Steve Brigham and the then residents of Tent City, the parties agreed that:

The Task Force confirmed that Tent City has been expanded by the construction of at least 15 new structures and the expansion of facilities which now include a well, and a new generator that powers a washer and dryer all in violation of the July 15, 2010 Consent Order.

This was brought to the attention of the Court and in lieu of further litigation, the representatives of the residents of Tent City agreed to voluntarily remove all structures, wells and other improvements constructed or installed in violation of the July 15, 2010 Consent Order.

Deputy Langert could not confirm a date by when the structures had to be removed.