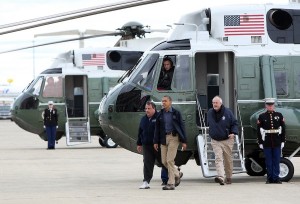 Gov. Chris Christie has said that if he decides to run for president in 2016 he will not leave office. A run for the White House would entail a tremendous amount of out-of-state travel, but Christie has insisted he can govern the state from anywhere. This may surprise many, but top Democrats in the New Jersey legislature actually agree with the governor.

“He’s running for president. That’s what it sounds like to me and that’s fine, but he’s still the governor of the state of New Jersey and our issues have to be addressed,” said State Sen. President Steve Sweeney (D-West Deptford). “Listen, if he wants to travel around the country that’s fine. I’m not worried about that. I’m worried about getting our economy going, funding our pensions, funding our TTF (Transportation Trust Fund).”

The governor has been criticized often for his frequent out of state trips while serving as chairman of republican Governors Association in 2014. Assembly Speaker Vinnie Prieto (D-Secaucus) conceded that Christie was able to work with lawmakers while traveling and that must also be the case if he runs for president.