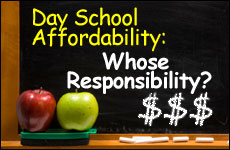 Families with school-age children cannot afford to sustain the schools alone. The tuition crisis is one of the most significant issues challenging the Jewish community today. School administrators and board members know the staggering costs of providing a quality education. The parent body, frequently both mom and dad, work long hours. And even if they make upwards of $200,000 a year, they can still be challenged to make ends meet if they have multiple tuitions to pay.

Desperate times call for desperate measures. Scholarship committees have proposed drastic restrictions on the spending habits of families receiving assistance. Many schools have been forced to close their doors for good. Tragically, many students have been pulled out of day schools and enrolled in public school. Read the blogs. Families are buckling under the stress and anxiety caused by the skyrocketing costs of educating their children. Sadly, too many couples are opting not to have additional children, making the high cost of tuition the most effective birth control today.

To call this a crisis is not an exaggeration. The current system where the costs outweigh what the parents can pay is certain to implode. I personally believe that the long-term solution will ultimately come through legislation on the state and federal levels. Tax code issues, corporate tax credits, and funding for secular education (assuming a limited interpretation of the Blaine Amendment, which prohibits the use of state funds at “sectarian” schools) are all options being pursued by Jewish communal leaders, but unfortunately, they are still years down the road. Another excellent long-term solution is for people to leave 15 percent of their assets to their local day schools. As the years go by and the endowments grow, the financial stress borne by the schools will be alleviated.

We may not be able to fix the problem in the short-term, but there is a way we can begin to improve the situation. This will require full, and perhaps unpopular, participation of the entire community. Historically, Jewish communities in Western Europe never had a tuition crisis. They had a gemeinde, a communal fund created by an equal percentage of everyone’s funds. The leaders of the communities decided how much each individual should contribute and how the money would be distributed. Consistent with Jewish tradition, the mikvah was the first priority; Jewish education was second. This meant that every member of the community was committed to giving a majority of his charity money to the local schools.

With the exception of Zurich, Switzerland and German Jewry, the gemeinde has become obsolete. People today do not want to be told how much money they must give away or to whom it must be given. It is true that today significant dollars are given to worthy causes, but our local schools are not often enough the beneficiaries of the community’s largesse.

From a Torah point of view, this is a terrible mistake. Our greatest leaders have advocated that anywhere from 67 to 75 percent of our obligatory charity dollars must be given locally – aniyei ircha kodmin, “the needs of your local community take precedence.“ Imagine if every member of the community gave 10 percent of his income to tzedakah, and a majority of that money went to our schools! We would still have challenges, but we would not have a crisis.

Jewish communities consist of five components: singles; couples who either have no children or have very young children; families with school-age children; empty nesters and seniors. Singles and young couples are still finishing their education and establishing their careers. They may not feel rooted in the community they live in, and they may have little or no connection to the day school. Why should it be their responsibility? Empty nesters and seniors can justifiably say they have done their share – they have paid their tuitions and worked tirelessly on behalf of the schools. Now they want to support other causes that are meaningful to them. Why should the responsibility fall on them?

Without day schools, we face staggering rates of assimilation.

With all due respect, while these attitudes are understandable, they are not acceptable. Families with school-age children simply cannot afford to sustain the schools alone. From a Jewish standpoint, the obligation to keep the majority of charity dollars local applies to all ages and stages of life – not just to those with school-age children. Historically, members of the community made it an absolute priority to take care of their own. And philosophically, all of us who are part of a community must recognize that Jewish education is not a luxury – it is a necessity! American Jewish history has clearly shown that without yeshivot and day schools, we face staggering rates of intermarriage and assimilation.

If we care about the future of our community – its growth, its strength, its commitment to our values and traditions – then all who are members of that community must accept the responsibility to make sure our schools are viable and healthy by committing our charity dollars first and foremost to supporting Jewish education in our hometowns.

One community had an outstanding idea that I hope will become the norm: every member of the community must make a pledge to give 60 percent of his or her charity money to local institutions, and 60 percent of the funds earmarked for local causes should be invested directly in the day schools. I want to urge rabbis, principals, presidents, and other community leaders to advocate this idea in every community struggling to make Jewish education sustainable. If every member of the community made and honored this pledge, we would not solve the tuition crisis in the long run, but we would bring much-needed relief to families who are consumed with stress and worry over their tuition costs.

We are approaching the High Holidays, when as individuals and as a community we face judgment. How can we stand in the presence of the Almighty and beseech Him to bless and protect us if we are not doing all that we can to share our blessings and protect our own?

This Rosh Hashanah, let us all make a pledge to say “it is my responsibility” – because by taking responsibility we can alleviate the very real and destructive suffering of so many good and hard-working families. By taking responsibility, we can make the ultimate investment in the health and future of our people, and insure that every child, every family, and every community reaps the immeasurable benefits of Jewish education. Aish.