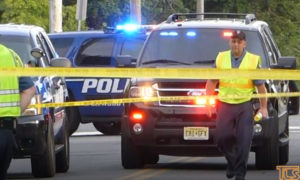 The number of people killed as the result of drivers running red lights has spiked sharply in recent years, according to analysis of crash data by the AAA Foundation for Traffic Safety. And, more often than not (almost 65% of the time), the victim is not the offending driver.

“This disturbing trend impacts everyone on our roadways – drivers, passengers, cyclists and pedestrians,” says Tracy Noble, spokesperson for AAA Mid-Atlantic. “It is critical that all parties understand this increased risk and adjust their behaviors accordingly.”

“Defensive driving and limiting distractions is something we teach students of all ages every day,” says Kurt Gray, the Director of AAA Driving Education. “You cannot control the bad behavior of other drivers but you can change your own behavior to help reduce your risk.”

Statistics indicate that red light running crash deaths jumped almost 30% between 2012 and 2017, the most recent crash data available, with the aggressive, reckless behavior claiming at least 2 lives every day across the US.

The most recent crash data available shows 939 people were killed in red light running crashes in 2017 — a 10-year high.

“Drivers who decide to run a red light when they could have stopped safely are making a reckless choice that puts other road users in danger,” said Dr. David Yang, executive director of the AAA Foundation for Traffic Safety. “The data shows that red light running continues to be a traffic safety challenge. All road safety stakeholders must work together to change behavior and identify effective countermeasures.”

According to the AAA Foundation’s latest Traffic Safety Culture Index, 85% of drivers view red light running as very dangerous, yet nearly one in three say they blew through a red light within the past 30 days when they could have stopped safely.

According the AAA Foundation analysis of state data, New Jersey has a lower than average rate (1.7/M) of red light running fatalities per year as compared to other states nationwide (2.4/M), as well as neighboring states of Delaware (3.9) and Pennsylvania (2.0) but a higher rate than New York (1.3/M).

To prevent red light crashes, Drive Defensively, #DontDriveIntexticated and other tips from AAA:

Pedestrians and cyclists should also stay safe when traveling near intersections. AAA recommends: