Corzine’s Farewell And Final State Of The State Address 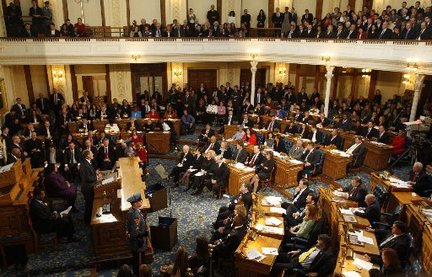 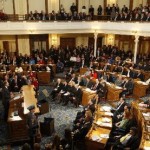 (VIDEO and link to full speech in extended article). In the final sweep of his last state-of-the-state address, Gov. Jon Corzine discussed the values that drove him, a multi-millionaire “old-time banker,” to get into politics. “For me, deficits should be measured in more than dollars and cents,” he said. “There are also deficits of decency, opportunity, security, and hope. Deficits that can threaten our future as gravely or even worse than a failure on a balance sheet. It is this belief that guided my every action over the past four years. If we fail to invest in our children, if we shirk our responsibility to provide them with the full blessings of citizenship, then we don’t just fall short in our moral responsibility, we undermine our long-term future for selfish, generational gain,” he said.

He spoke about the “cornerstone” of his legacy – improving education, holding out Oliver Street school in Newark and Park Avenue elementary school in Orange as examples.

“These new schools aren’t just abstractions in a debate,” he said. “They offer hope to the lives of real people, to our kids. … New Jersey’s students out-perform the rest of the nation in reading, writing, and math. They graduate and attend college at rates that exceed those of nearly every other state in the nation.”

Corzine talked about the 100,000 children who were added to Family Care, a health insurance program for the working poor.

“These are the priorities I have championed as your governor,” he said.

Corzine called New Jersey a “beacon for progressive government” by tripling the number of housing vouchers, adding food assistance, adding paid leave time for workers who are taking care of sick relatives or new children, and passing legislation such as access to medical marijuana.

He reiterated his support for gay marriage, saying he had listened to the “compelling argument that separate institutions can never be equal.”

“Marriage equality, in my view, is an idea whose time has come,” he said.

He choked up in tears as he neared the end of his speech, which lasted 35 minutes and during which he was interrupted by applause 22 times.

“I didn’t accomplish everything I set out to do. I didn’t execute the job flawlessly,” he said. “I’m certainly not as quick with a quip as Gov. Byrne. Or as polished a politician as Governor Kean. But I tried and, I hope, in some good measure, succeeded in making this state a more humane place for its children and families.”

With that, the entire room – consisting of Supreme Court judges, ex-governors, the state Assembly, the state Senate, his cabinet and others – stood and applauded.

As a coda, Corzine described watching President John F. Kennedy’s inauguration when he was 14 years old.

“I could have never imagined that one day I’d enjoy the awesome privilege of serving in the United States Senate with his youngest brother,” he said.

He then quoted Sen. Ted Kennedy’s speech to the Democratic National Convention in 1980, and gave his own version:

“When it comes to standing up for a kinder, more progressive world, when it comes to raising my voice for our children who represent our common future, your cause still endures in my heart,” he said. “Your hope still lives in the eyes of my grandchildren and yours. And your dream of a more just and equal world will never die.”

3:16 p.m. — Gov. Jon Corzine in the second part of his final State of the State address reviewed the items he left unfinished, and the things that still need to be done.

“Let’s call it like it is: everyone’s property taxes are too damn high,” he said. “Let’s also be brutally honest: until we reform our state’s antiquated structure for providing local government services, a home-rule system dating back to the 17th century, we’re never going to get the job done.”

Corzine said that although property taxes continued to grow, the rate of growth had slowed by half, citing that the state is cracking down on municipal levies and encouraging local governments and schools to consolidate their functions. Meanwhile, he said he gave more money back to property owners – particularly seniors – through rebates than any other governor, and expanded payments to local school systems.

He called for a reform in the way municipalities pay for services.

“As we have grappled with this issue, I have learned that there is only so much that Trenton can do without structural reform, and by that, I mean constitutional reform,” he said. “If we truly want to tackle the age-old problem of property taxes, we have to embrace economies of scale and do away with our outmoded system for delivering local services.”

Corzine said he had “accomplished a great deal together” with both parties.

He ticked off a list of what had been done, including an energy master plan; tighter safety laws on the roads; the groundbreaking of a rail tunnel under the Hudson River; more women judges; halted the practice of raiding the unemployment insurance trust fund that pays unemployment benefits; putting new crime-fighting strategies in place.

“Just this morning, I signed into law legislation you advanced yesterday that would finally allow judges more needed discretion over the sentencing of non-violent drug offenders,” he said.

He highlighted his response to the recession by passing an “economic recovery package” as well as a growth package passed last summer.

He said President Obama and Vice President Joe Biden “looked to New Jersey for ideas and they used them.”

Corzine said he could not get the support to fully do away with dual-office holding or extend pay-to-play.

“But that doesn’t mean that we stopped trying, even when we fell short,” he said.

And he addressed the “elephant in the room:”

“My glorious asset monetization plan was, to say the least, controversial, unpopular, and unsuccessful,” he said. “That said, those town hall meetings opened a painful but necessary dialogue the state must continue, a dialogue about how we pay for what we want.”

He said the state will still need to pay for debt that is the result of decades of sometimes “reckless” borrowing.

“There is no easy solution, and in my view certainly no answers without revenues,” he said. “Doing nothing isn’t an option unless the choice is to deeply impair New Jersey’s future.”

“While the green shoots of recovery are sprouting, these are hard times. There’s hard times for far too many families across our state,” he said. “Not since the 1930s have our state and nation faced such a stark economic crisis. For New Jersey, like other states, this means that tax revenues have fallen dramatically.”

But he warned future leaders to be mindful of the potential pitfalls of their budget cuts.

“In meeting the challenges ahead, I would advise you to weigh carefully the long-term consequences of your choices, as well as the necessities of the moment,” he said.

“Under-resourcing our new education formula might help balance the books today, but it will limit our children tomorrow while running the risk of a return to court-mandated educational policies.”

Corzine said the recession that started in fall 2007 forced him to make unpopular choices – the type that lost him the November election and left him with a 61 percent disapproval rating as he leaves office.

Yet he highlighted what he considered his economic accomplishments, such as a final $29 billion budget that was lower than his first-year budget.

“What kind of politician would have cut property tax rebates in a re-election year?” he said.

At the start of the speech, he welcomed new Senate President Steve Sweeney and Assembly Speaker Sheila Oliver, who were sworn into their leadership positions today.

Corzine also asked for a moment of silence to honor Joe Kealey, a patrolman with the Department of Transportation emergency service who died last night.

He said he’d hoped he be making a midpoint speech, but said the years he has spent in elected office in New Jersey “have been fulfilling beyond my wildest imagination.”

He congratulated Gov.-elect Chris Christie again on his victory and asked the state to come together for the sake of the state’s future. Star Ledger