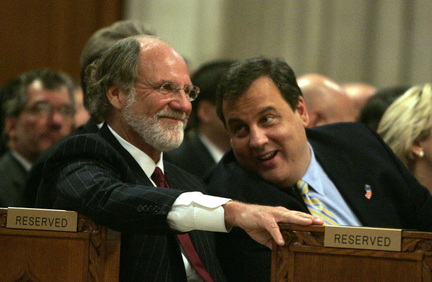 The battle between Gov. Jon Corzine and Gov.-elect Chris Christie over lame-duck nominations has ended. Corzine and Christie have reached an agreement that will end the hostilities that had marked the gubernatorial transition, the governor’s office announced today.“The Governor-Elect and I concur that incoming and outgoing administrations should identify their priority appointments and come to an amicable and balanced agreement, and that’s exactly what we’ve done here,” Corzine said in a statement.

Corzine has agreed to refrain from nominating new members to seven agencies: the Board of Public Utilities; the Port Authority of New York and New Jersey; the New Jersey Sports and Exposition Authority; Horizon Blue Cross/Blue Shield; the Council on Affordable Housing; NJ Transit; and the Turnpike Authority. Corzine said the agreement “includes a commitment to work together” to quickly fill upcoming vacancies on the State Investment Council.
In return, three people familiar with the negotiations and the final deal said Christie has agreed to consent to Republican state senators lifting their holds on all Corzine nominees — something that had stymied a number of key appointments including the nomination of Corzine’s chief of staff, Ed McBride, to a Superior Court judgeship in South Jersey.

“The agreement recognizes the prerogative of a sitting Governor to make appointments but extends to the Governor-Elect deference that should be rightfully afforded any administration as it prepares to work with the Senate to advance candidates to policy-making boards,” Corzine said. “The agreement further recognizes that many current board, judicial, and prosecutorial vacancies resulted from qualified candidates being blocked and that obstructionism should not be rewarded.”

Maria Comella, Christie’s spokeswoman, said the governor-elect wanted the right to nominate people to boards that carry out administration policy.

“From the beginning, Governor-elect Christie has maintained that it is imperative key policy making boards and commissions are led by individuals who are ready to effectively execute the incoming administration’s vision,” Comella said. “These key entities are instrumental to addressing our state’s many challenges and part of a Christie administration’s comprehensive approach to achieving real change. We are pleased that Governor Corzine understands the importance of these policy making entities and that Governor-elect Christie will be able to put together a team critical to fixing New Jersey’s dire fiscal situation.”

The battle over nominations had become a political cause celebre in the weeks after Christie and Corzine had pledged to work together in a “smooth” transition. Christie, a Republican, beat Democrat Corzine in the Nov. 3 election.

The two side were not even talking to each other going into New Year’s, according to officials in both camps. A lengthy series of back-and-forth phone calls from Dec. 30 through Monday night led to the final agreement. Talks at one point had broken down entirely on Sunday night but were revived Monday. Star Ledger.