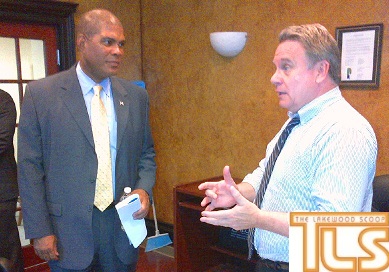 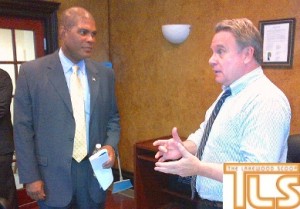 “District Manager Mark Anderson and Postmaster Al Barbato made the commitment today that the postal needs of the downtown customers will continue to be met under the new retail CPU to be established a block away from the current post office,” said Smith regarding the impending sale of the Lakewood Post Office building on Clifton Avenue.

In a meeting hosted by Smith, with Lakewood Committeeman Meir Lichtenstein, leaders of the Lakewood community and top-ranking New Jersey postal executives—including South Jersey District Manager Mark Anderson and Lakewood Postmaster Al Barbato—USPS officials expressed their dedication to providing a seamless transition to the downtown area while at the same time significantly increasing services at the Lakewood Carrier Annex located at 1820 Swarthmore Avenue.

The longtime postal facility on Clifton Avenue, which has been slated for closure for several years, is scheduled to be sold in November. The 19,342-square-foot, 1930s art deco-style building has been a downtown hub for many years, but officials says it is underutilized and no longer efficient. As a result, many services will be moved to the more modern facility roughly two miles away in the Industrial Park.

According to Anderson, the majority of the services will still be available downtown within walking distance for most, and expanded services—including post office boxes—will be conveniently accessible all day, at night and on weekends on Swarthmore Avenue.

Congressman Smith scheduled today’s meeting after months of discussions with postal officials about ensuring quality services to the residents of Lakewood. Members of the New Jersey Chaplains Association also attended the meeting and spoke of residents’ concerns about services.