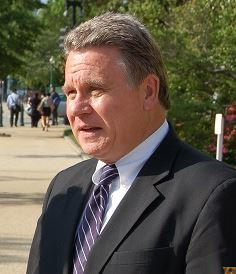 Lakewood’s longtime voice in the House of Representatives, Congressman Chris Smith, is once again at the forefront of combatting anti-Semitism and hate around the world.

Congressman Smith serves as Chairman of the House’s Africa, Global Health, Global Human Rights and International Organization Subcommittee, a platform that he has effectively used to make a real difference. The Republican Congressman recently sent a letter along with Democratic Congresswoman Nita Loewy of New York, ranking member of the House Appropriations Committee and its subcommittee on State and Foreign Operations, and another 114 members of Congress, to Secretary of State Rex Tillerson urging him to promptly fill the position of Special Envoy to Monitor and Combat Anti-Semitism.

This position and necessary support staff were originally mandated by Congress through legislation authored by Congressman Smith and passed in 2004, and is fully funded in the FY17 omnibus budget bill. The Envoy and staff are tasked with monitoring and combating anti-Semitic acts around the world; document these incidences; and work together with domestic and international governments and non-governmental organizations.

To date, neither the Envoy nor the office have been filled under the Trump Administration. Congressman Smith warned that this can have dire repercussions: “Jewish communities here and abroad continue to be targets of hatred and deadly violence…Seventy-two years after the Holocaust ended, anti-Semites continue to target the Jewish people for discrimination, destruction of property and even death.”

Hopefully, this aggressive push by an influential bipartisan coalition in the House will lead to this position being filled very soon, with real results around the globe to follow.

One cannot overestimate the gratitude that the Jewish community, particularly in the Lakewood area, feels towards Congressman Smith. He takes anti-Semitism, anywhere, very personally and has been fierce and persistent in his advocacy. The Congressman enjoys a particularly close relationship with members of The Lakewood Vaad, who are in direct contact with him on a monthly basis, at a minimum.

“Every time we speak, it is evident just how sincere Congressman Smith is regarding all issues that affect us,” says Rabbi Aaron Kotler. “The topic of anti-Semitism is on everyone’s minds, we hope that the Trump Administration will allow Chris Smith’s voice to be heard now.”