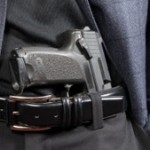 House lawmakers easily approved legislation on Wednesday that would require states to observe concealed-weapons permits issued by other state governments in a victory for Second Amendment champions in Congress. In a bipartisan 272-154 vote, more than 40 Democrats joined with nearly every Republican in voting to support the bill.

Rep. Lamar Smith (R., Texas), the chairman of the House Judiciary Committee, likened the bill to requiring states to recognize other states’ driving licenses. He said that 49 states already extend some degree of reciprocity to permits issued by other jurisdictions.

“This landmark legislation recognizes the importance of the Second Amendment and makes it easier for individuals with concealed carry permits to travel to other states,” Mr. Smith said during debate on the House floor.

But opponents to the measure decried both the timing of the vote as well as the fact it forces other states’ gun laws on those with more restrictive gun statutes.

“Millions of people are out of work. Our growth rate is anemic. People are clamoring for Congress to pass legislation to grow the economy and help create jobs,” said Rep. Jerrold Nadler (D., N.Y.) “And so what is the House of Representatives doing? This august body is considering…gun legislation.”

Rep. John Conyers (D., Mich.), the top Democrat on the judiciary panel, another opponent of the bill, said the bill represents a “curious misunderstanding” of the constitutional right to bear arms. Mr. Conyers said that many prominent law-enforcement organizations also oppose the measure.

Following the House approval, Republicans in the Senate are likely to try to force a vote on the bill in the Senate later this year. Senate Democratic leadership aides said there are no plans to bring up the legislation as a stand-alone measure, citing the crowded legislative agenda. Read more in WSJ.