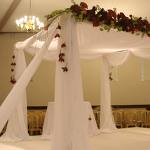 [COMMUNICATED] At first glance, Racheli Y looks like a kid. But the pain in her eyes shows a maturity beyond her years.

When she was only a teenager, she lost both of her parents over the span of a year. Her father’s passing was sudden, her mother’s was the culmination of a long struggle with cancer. She is currently living with her older sister, with very little to her name.

Now, this 20 year old is attempting the near impossible: making a wedding on her own. The marriage of a child is something that most parents save for for years, while the kallah & chattan are free to focus on preparations. However Racheli will be married in less than a month without any parental guidance or support. She has tackled this daunting task head on with a simple yet emotional crowdfunding campaign.

The campaign page shows somber video footage of the young bride. The pain in her voice is palpable. Between sentences she appears to fight back tears.

Her tone is hesitant, and understandably so. What are the odds that she, a girl with no parents, will raise the money needed to start her new life with dignity? However, Racheli has not given up hope, and promises to pray for all those who donate on her wedding day.

There is no doubt that her tears, standing under the chuppah without her parents, will be a powerful sight to behold.

If the global Jewish community can succeed in marrying off this special soul, it will be an incredible simcha. Donations for Racheli’s wedding and home are being accepted HERE for a limited time