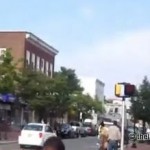 The manager at a Clifton Avenue store was attacked yesterday by a group of men, TLS has learned. At about 9:30 PM yesterday evening, the Frum manager went to get his car from the parking lot behind the shopping strip, when he noticed a group of Hispanic men hanging around near his car.

Ignoring the group, the manager sat into his car and turned on the engine, but didn’t see what was coming.

The group then began attacking him by throwing rocks and beer bottles at his vehicle, before they fled to Clifton Avenue.

Police were called – but took about 10 minutes to arrive, the manager says – and by the time police arrived, the parties were gone.

Luckily, the manager was uninjured and the vehicle only sustained minimal damage.

This afternoon, the group was once again spotted in the area and police were flagged down by the store owne.

The store-owner tells TLS the men were ticketed for unknown offenses and sent away from the area.

The store-owner also says, police offered to standby at his store during closing for the next few nights, to ensure the situation is under control and the incident doesn’t occur again. TLS-CCP/TLS-MK.