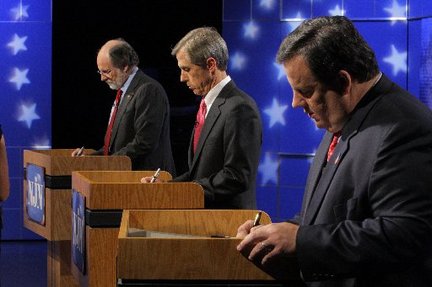 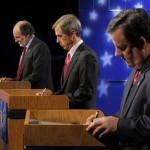 When he had one opponent, Chris Christie was cruising – up by double digits in polls that showed New Jersey voters couldn’t wait to dump Gov. Jon Corzine. Christie has two rivals now, thanks to the rise of independent Chris Daggett. And with 16 days left until the election, the Republican’s path to victory is now anything but assured. “It puts Chris Christie in a very difficult position. He’s got to fight a war on two fronts,” said Peter McDonough, a veteran GOP strategist. “Chris Christie’s now got to fight a war against Corzine and stop a war of attrition with Daggett.”

With the Democratic governor seemingly stuck in the low 40 percent range, Daggett’s recent increasing support has come at Christie’s expense in a contest that will go down to the wire, pollsters and political experts say.

The latest Quinnipiac University poll gives Christie 41 percent, Corzine 40 percent and Daggett 14 percent among likely voters. It showed an eight-point swing of unaffiliated voters from Christie to Daggett in the past two weeks

“This started out as an ABC election – anybody but Corzine – and so presumably Christie would’ve benefited from the ABC people,” said Maurice Carroll, director of the Quinnipiac University Polling Institute. “Daggett’s murdering him.”

Whether that support sticks – only 39 percent of Daggett voters told Quinnipiac that their minds are made up, and 77 percent of all voters said he has no chance of winning – will likely determine the outcome, Carroll said.

“The question is, where do they go?” he said. “That’s the election.”

Underscoring those tremors, Christie’s campaign on Friday launched a new television commercial showing Daggett as an extension of the unpopular Corzine.

“Corzine-Daggett, more of the same,” a narrator says, knocking both of Christie’s opponents on taxes and tolls before the GOP candidate appears to say he’s the only one who can change Trenton. It was released as the three major candidates met in their final televised debate at William Paterson University

That ad followed spots released earlier in the week by the Republican Governors Association that call Daggett a “Corzine in sheep’s clothing” and attack his property tax plan, which would cut local levies and expand the sales tax.

Daggett, who has built his candidacy around criticizing both major party candidates, went harsher on Christie after the RGA ads, to the delight of Democrats. He even borrowed consistent lines of attack from Corzine — going after Christie’s brother’s donations, and saying Christie holds himself to a standard that’s different than the “one for everyone else.”

While Daggett took several jabs at Corzine during Friday’s debate, one of the more biting exchanges was between the independent and Christie.

“I’m going to buy you a calculator, Mr. Christie, because your numbers don’t add up,” Daggett said of Christie’s budget proposals.

“I’m going to get you a dictionary Mr. Daggett because only you can take a $4 billion tax increase and call it a tax cut,” Christie said of Daggett’s property tax plan.

The only independent to qualify to participate in the debates, Daggett gained legitimacy after a barrage of Corzine ads drove up negative opinions about Christie, said Joseph Marbach, a political scientist and dean at Seton Hall University. Daggett also positioned himself as the only candidate to offer a property tax plan, Marbach said.

“Timing is everything, and he happened to pick the right year to run as an independent, when the campaign would get so negative so quickly,” Marbach said. “Ultimately what voters are going to have to decide is whether Daggett is viable and has a viable chance, or whether Christie’s the best hope for change.”

Further complicating matters for Christie is the trickiness of targeting an upstart independent with little money and bad ballot position. The RGA may have done Daggett a favor by boosting his name recognition, said Bill Pascoe, a Republican strategist who has worked on New Jersey campaigns.

“He couldn’t buy an ad if his life depended on it,” Pascoe said.

Forced to fight on two fronts, Christie was wise to lump Corzine and Daggett into one tax-hiking entity, according to GOP and independent strategists. But even ads equating Corzine and Daggett’s policies don’t go far enough unless they hit voters over the head with the consequences, McDonough said.

“He’s got to send a message that is crystal clear and unabridged – ‘If you vote for Chris Daggett, you’re going to re-elect Jon Corzine. Have a nice day,’” McDonough said.

Christie, who has publicly downplayed the impact of Daggett’s candidacy, kept it up after the debate when was asked by reporters whether the independent is the biggest hurdle in his path.

“I don’t believe anybody is standing in the way of me being governor of New Jersey, and I don’t believe that anybody owns any particular votes,” said Christie, who tried to stress that it still boils down to a two-way race.

After the debate, Corzine was asked whether he thought a vote for Daggett would be a wasted vote.

“I’m not going to try to tell the people of the state of New Jersey who to vote for,” he said.  Star Ledger