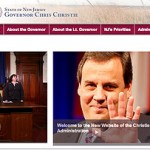 Gov. Chris Christie’s office Wednesday announced it has launched a website, nj.gov/governor, that is described as designed to serve as a portal of information where New Jerseyans can get updates on policies, initiatives and events involving the governor and his administration. The site has Web 2.0 features that will allow users to interact directly with the governor and his staff. The website features a new blog, “You’ve Been CC’d,” integrated social networking sites and video. The governor’s office saidthe site allows for a two-way conversation where New Jerseyans can have their questions answered, share their opinion and hear directly from Christie and other members of his administration.

“We built the website keeping in mind that not only do we want to keep New Jerseyans informed, but we want to collaborate with them throughout Governor Christie’s term in office,” said Maria Comella, deputy chief of staff for communications. “Rather than using the website as an end point, this will be a jumping off point for users in the process of sharing ideas.”

Key features of the website include: a newsfeed, the blog, the governor’s YouTube page featuring video depicting Christie, his cabinet, staff and other administration officials, real time twitter feed for Christie and NJGovNews. It also features access to the office RSS Feeds, Facebook and Youtube, the Newsroom page with press releases, audio, video, and photos, and the Priorities page providing information on policies and initiatives.

“More and more, Americans are going to websites, blogs, social media, and other internet-based resources to get their information,” said Patrick Jones, Christie’s director of new media.

“Nearly 1 in 5 Internet users are using Twitter or similar mediums to get and share information, 27 percent of Americans adults are using social networking sites, and 6 out of 10 adults are seeking out critical health information online,” Jones said. “Our goal is to communicate directly with the public with timely, important information from Governor Christie and their state government. This new website will enable us to be that much more effective in engaging the public.”

Christie came under fire from Democrats earlier in the month for hiring Jones, 25, of New York, a former campaign media aid, for $60,000 when the governor has talked of trimming the state government payroll and spending.

Despite Christie’s pledges of transparency, Jones refused to tell a reporter the amount of his annual salary although it is public information. It took the reporter 24 hours to get the information from the governor’s office. NJN