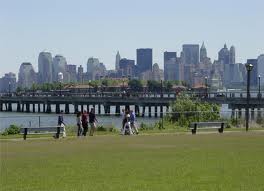 Liberty State Park, New Jersey’s most popular state park that draws more than five million visitors a year, will partially re-open by Thanksgiving Day after being shut down and seriously damaged by Hurricane Sandy, the Christie Administration announced at a news conference at the park today.

“We know how important this park is to the people of the region, the state and even the nation, as the gateway to the Statue of Liberty and Ellis Island,” said DEP Commissioner Bob Martin. “Reopening sections of Liberty State Park is a significant step forward considering the considerable damage Sandy inflicted. It is part of the Governor’s commitment to rebuilding our state and is a symbol of our state’s resolve to recover from this storm.”

“I have directed our parks officials to take every step necessary to ensure this park is open for the upcoming holiday. We invite people to come back out to Liberty State Park and get a  respite from the rigors of this storm, to enjoy the serenity of the park and incredible views of the New York skyline, Statue of Liberty and New York Harbor,” added Commissioner Martin.

The DEP will reopen the 9/11 Memorial, the Grove of Remembrance and certain passive recreation portions of the park by Thursday. Liberty Landing Marina already has reopened and popular restaurants at the site are set to reopen this evening.

“Our staff has been working tirelessly to clean up and restore the park,” said Richard Boornazian, Assistant Commissioner for Natural and Historic Resources. “We will continue to work to restore access to the Interpretive Center, portions of the Hudson River Walkway within the park, and the iconic Central Railroad of New Jersey Terminal Building, which served as the launch point into America for millions of immigrants.

“There is a great deal of other damage and debris removal that must be addressed before the park can fully reopen,” added Boornazian. “This is a priority for our parks personnel.”

The Terminal Building sustained serious water damage as a result of Sandy’s storm surge. It currently has no power and sanitation. An assessment is underway now to determine how to repair and restore the structure as quickly as possible.

During today’s news conference, DEP officials also detailed progress toward reopening other parks and historic sites damaged by the storm. As of today, 28 of 39 state parks are fully or partially open.