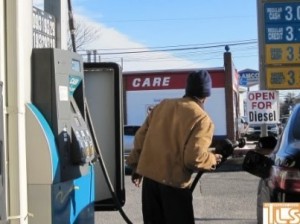 Monday marked the beginning of the yearly transition to winter-blended fuel. Starting on September 15, retailers began selling a blend of gasoline that is less expensive to produce because it does not have to meet the same federal emissions reduction requirements that are required during warmer summer months. The national average price for regular unleaded gasoline dropped to $3.34 per gallon Friday, which is the lowest price for this date since 2010 when gas averaged $2.73. Today’s national average is 5 cents lower than a week ago, 9 cents less than one month ago and 13 cents less than one year ago.

Late last week, the United States issued another round of sanctions targeting Russia’s energy, defense and financial sectors. This latest round of sanctions are in response to Russia’s continued activity in Ukraine, and are designed to impact that nation’s deepwater, Arctic and shale oil production plans. Similar action was taken by the European Union, and in combination could impact US oil companies that produce oil with Russia. Market watchers will continue to monitor this situation and its impact on global markets. Despite geopolitical tensions and continued unrest in northern Iraq, global oil prices continue to point lower, near its cheapest price of the year. Crude oil settled at $91.76 on Friday. The last time crude oil settled below $90 per barrel was April 2013.

“September 15 marked the start of retailers selling less expensive, winter-blended gasoline, which is welcome news for motorists,” said Tracy Noble, spokesperson for AAA Mid-Atlantic. “AAA expects prices at the pumps will continue to inch downward in the coming weeks, barring any unforeseen circumstance, potentially falling another 10 to 20 cents by the end of October.”

The average price at the pump typically falls during this time of year due to decreased demand and the transition to winter-blend gasoline, which is cheaper to produce. AAA expects the national average to fall another 10-20 cents by the end of October.