Chanukah In A Whole New Light 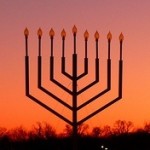 By Avi Aaron. On Chanukah we thank Hashem in al hanisim as follows: al hanissim, v’al hapurkan, v’al hagvuros, v’al hateshuos…v’al hamilchamos, (for the miracles, salvation, mighty deeds, victories… and battles). The obvious question begs itself: Why do we give thanks for the battles? Understandably so, we express our profound appreciation for the salvation which happened through war and the amazing miracles that accompanied it but who wants war? We want to be victorious in war but we are grateful when war ends and peace reigns. So, why are we expressing our thanks for the war?

Finally, why is there no seudas mitzvah on Chanukah like we have on Purim? True, on Purim we were saved from annihilation and Chanukah was more of a spiritual victory. However, a significant component of the neis Chanukah was our victory in battle. Most of al hanisim is praise for the miraculous deliverance during the war and its battles.

Let us start with the first question, i.e. why do we thank Hashem for the battles?

A segment of klal yisroel unfortunately fell prey to the Greek lifestyle. They saw nothing wrong with incorporating Greek culture into their everyday lives. To fight the Greeks, the Chashmonaim had to first challenge many of their neighbors, friends and fellow Jews. They were battling the popular Hellenist culture as a minority within a minority. We therefore thank Hashem for giving the Maccabees the courage, morale and backbone to initiate the war in the first place.

Which brings us to the second question…What is miraculous about the victory of the righteous over the wicked?

After the war was won, many of the Jewish people were still Hellenists or Hellenist sympathizers. They could have easily wrested control from the Chashmonaim. We therefore show our hakaros hatov for the complete victory over the Greeks as well as for the fact that the Chashmonaim, who were a minority amongst the Jews, continued to retain control despite their Hellenistic brethren.

The final question…Why is there no seudas mitzvah?

Greek culture dazzled. The Jews came face to face with an intriguing culture unlike anything they had experienced before (not unlike the American pop culture of today which has invaded the entire world). The Greeks were intellectual, literate, and creative with deep philosophical underpinnings.

Yet, despite some superficial similarities there were profound ideological differences between the Jews and the Greeks. To the Greeks what was beautiful was holy; to the Jew what was holy was beautiful. The Greeks envisioned their gods in the image of man; the Jews believed the opposite – man had been created in G-d’s image. The Greeks put man first; the Jews by the very nature of their existence put G-d first.

Attica (Greece) worshipped the physical body, represented by health, strength and physical beauty. The Olympics were the pride and joy of the Greek people. There was no sanctity of soul, just perfection of body.

The ensuing “darkness” of Greece caused many Jews to be confused and to mistakenly believe that the Greek “reverence” for the external was something to adopt for themselves. As a result, they pursued beauty for its own sake and honor as the fitting crown of one who excelled at physical accomplishments.

The real battle that was waged during the times of Chanukah was for the hearts, souls and minds of the Jewish people. It was a battle to eradicate a worldview that elevated the physical above all else. It may have been rooted in a military campaign but its objectives were purely spiritual.

For the real truth is that a person’s face or physique, possessions, home, clothes, or societal stature are not the summation of a man for they are all, as the Maharal explains, extrinsic to the person, and capable of being removed. Only spiritual accomplishment and character improvement are the proper measure of man’s eternal success. These acquisitions are the result of man’s choice throughout life not gifts given at birth. These are intrinsic and can never be removed.

Were we to put effort into making a seudas mitzvah, it would diminish the emphasis of Chanukah on the spiritual message contained within the victory. Rather than indulging in food and drink we aim to concentrate on developing our intrinsic qualities and to disregard the extrinsic elements of life.

Based on this, we can possibly understand why it’s forbidden to use the light of the candles for personal use. These neiros stand as proud ambassadors of that crucial message. Therefore, the light is to be appreciated for its intrinsic value and not for its practical use.

Sometimes we are so busy making a living that we hardly have time to live. We have to realize that the physical world is akin to a movie set methodized to enable the soul-body partnership to make those eternal choices. The job, the car, the house, the portfolio etc. are not status symbols but external tools to be appropriated wisely on life’s journey.

Were we to internalize the message of Chanukah and focus on our internals whilst leaving the externals to Hashem, then anything could happen. Wars can be won by the few, oil can burn for 8 days and tiny Klal Yisroel continues to survive the odds while mighty empires vanish from the face of the earth.

(Based in part on Lev Sholom – Miketz)