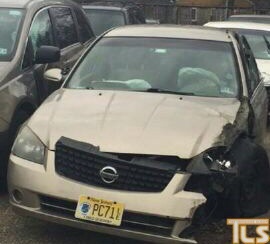 A Lakewood resident involved in a motor vehicle crash this past Motzei Shabbos (Saturday night) caught the accident on his dashcam video recorder.

The driver says he was heading southbound on Route 9 at about 11:30 PM, when he saw a northbound vehicle zigzagging at a high rate of speed.

Efforts to avoid the out-of-control vehicle were unsuccessful, and the vehicle slammed right into his. His dashcam was thrown from the windshield from the strong impact.

The driver and his two children in the vehicle were transported to a local hospital, and released a short time later. . His wife, also a passenger, was not injured.

According to a witness, the driver tells TLS, a man and woman were seen emerging from the other vehicle, but the male reportedly left the scene.

Upon the arrival of police, the woman reportedly told police that the man she was with had just come out of jail and was afraid to be around when police arrived. She also claimed she was the driver, and she was issued two summonses at the scene – including one for reckless driving, the victim says.