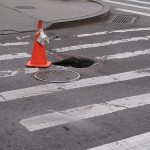 New Jersey can’t afford to inspect bridges, repair drainage systems or even fill potholes so it’s pushing off nearly $70 million in routine repairs onto a trust fund that is nearly bankrupt. Last week that fund agreed to borrow another $1.2 billion for its work, raising even more concerns about the state’s record debt and the tax money needed to pay it off. But lawmakers say they have no choice but to turn to the Transportation Trust Fund, which relies on borrowed money along with tolls and gas tax revenue to keep it afloat. The state budget simply does not have enough money to cover things like patching potholes, and the maintenance projects keep the state’s aging transportation infrastructure safe, level and secure, lawmakers explain.
The trust fund collects more than $800 million that is supposed to pay for large-scale, long-term projects. But the fund itself is expected to dry up by mid-2011, when all the toll and tax revenue would go to making debt payments.

“The problem is there is no money,” said incoming Senate President Steve Sweeney. “We have budgets that can’t maintain the infrastructure we have.”

The DOT has paid more than $2.4 million for pothole repairs this year.

Other routine maintenance work supported by the trust fund includes:

• Inspecting bridges that are less than 20 feet long.

Critics say the trust fund should only pay for highway and mass transit projects that expand and improve the state’s infrastructure — not preserve its safety.

Wall Street is also worried: A ratings agency this week downgraded the trust fund’s credit rating for last week’s round of borrowing. Moody’s Investors Service said its outlook for the state’s transportation funding system is “negative,” saying New Jersey’s nearly $40 billion debt burden and depleted operating revenues would give the trust fund little flexibility in the event of an emergency.

“That’s how we got into trouble, because we’ve been taking so much money out of the trust fund,” said Jeff Tittel, director of Sierra Club New Jersey. “If you do potholes, it takes money away from the projects that are also necessary, like light rail and mass transit.”

The Transportation Trust Fund Authority, an independent agency of state government, administers the fund, which supports long-term projects such as an $8.7 billion tunnel that will connect Manhattan and New Jersey.

Gov.-elect Chris Christie has called for restructuring state government — through layoffs and eliminating departments — to help provide the funding that will pay for routine maintenance work.

He emphatically ruled out raising New Jersey’s 14.5-cent-per-gallon gas tax — the fourth lowest in the nation — to produce more revenue for the trust fund.

“Maybe we don’t do as many projects,” Christie said. “It may be that Sen. (Robert) Menendez and Sen. (Frank) Lautenberg have to get much more effective than they’ve been in bringing federal dollars for these kinds of projects.”

Sweeney, however, said relying on the state’s operating budget as a resource threatens the long-term viability of New Jersey’s transportation infrastructure.

Many of the state’s aging roads and bridges are in disrepair, he said, and the Corzine administration has warned that structures such as the Pulaski Skyway will need to be replaced within the next decade.

“There are no operating funds,” Sweeney said. “Do you just let them go and risk driver safety, or do you maintain the roads?”

Others say only a gas tax increase would preserve the safety of the state’s infrastructure.

“There should be more money for routine maintenance, and they should only borrow money for the big stuff,” said Kenneth Clausen, former New Jersey president of the American Society of Civil Engineers.

In recent years, the state has relied more heavily on borrowing money to pay for transportation projects as revenue from New Jersey’s operating budget and the trust fund have dried up.

Last week, Christie endorsed the borrowing of $1.2 billion to pay for previously approved projects through June 2010. The governor-elect said he had no choice but to “pay the bills” for projects that have already started.