Buses Running Again for Most Students; Extra Traffic Due to Carpooling 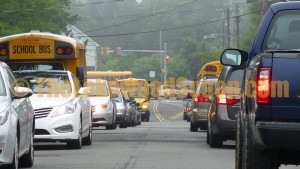 Though busing was restored for most Lakewood students, you can expect heavier traffic during this school year than previous years.

Under the newly-designed busing program finalized last month, the pilot program for the six largest schools in Lakewood (three boys schools and three girls schools) staggers the opening times to enable bus drivers to perform two routes instead of a single route. As a result, because of the required turnaround time, boys school openings are slightly pushed up, and girls opening times slightly pushed back.

However, children residing within .5 miles of their school are not included in the restored busing, as per the state’s demands, and are instead being carpooled, which explains the extra traffic on the roads during this first day of school.