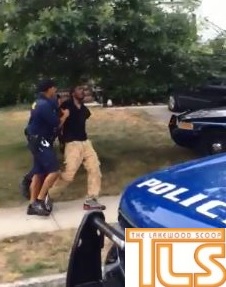 VIDEO: Two Lakewood police officers were hospitalized this morning following a foot chase and arrest which left them injured, police confirm to TLS.

Shortly before 9 AM this morning, police received a call from a Liberty Drive area resident who witnessed a man burglarizing a vehicle just outside his home.

Upon arrival, police were given a description of a black man who fled behind the homes in the area, and began searching the area, police tell TLS.

The officers caught up with the alleged burglar, and attempted to place him under arrest when he began fighting the officers, police say.

During the struggle, the suspect allegedly bit the officer, injuring him. Another officer also suffered a leg injury while attempting to arrest the suspect, police say.

Other officers arrived and took the suspect into custody.

The officers were transported to Monmouth Medical Center Southern Campus for treatment.

Police say several vehicles in the area were found burglarized this morning. The incident is under investigation.