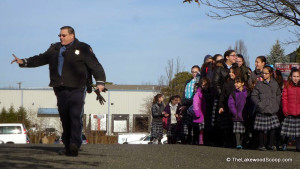 A bomb threat prompted the evacuation of a special needs facility, as well as an elementary girls school this morning, officials confirm to TLS.

The threat reportedly came over a voicemail to the ‘ARC’ – a facility for special needs people located in the Industrial Park area – around 8:30 AM.

The girls were sent to another school across the street and are being kept in the auditorium, officials say.

A perimeter has been set up as police await the bomb-sniffing K9 dogs.

UPDATE: 11:45 AM. As earlier reported on our news alerts, police have arrested a person in connection with the threat.

The suspect, reportedly someone who had connections to the facility, was reportedly arrested at his home in Brick by Lakewood’s Detective Bureau. He is being brought into Lakewood Police Headquarters.

Following a sweep from Ocean County Sheriff’s K9 and State Police K9 units, the facilities and schools were deemed safe and all are being allowed to return, officials said.