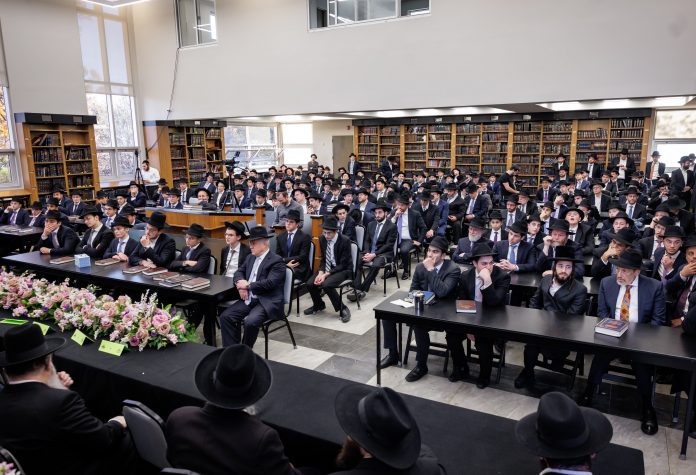 Yeshiva Ohr Naftoli celebrated their highly anticipated Groundbreaking Event on Sunday, October 30th on the yeshiva grounds in New Windsor, New York. Set against the backdrop of their beautiful 50-acre campus, this momentous event was thoroughly enjoyed by all who attended. This Groundbreaking kicks off the yeshiva’s incredible campus expansion campaign established to accommodate the steady growth of the yeshiva. Plans include an expanded mesivta dormitory, new dining room and kitchen, new gymnasium, and a new main entrance, lobby and classroom wing.

The yeshiva was honored to be joined by Horav Hagaon Rav Yerucham Olshin shlit’a, Rosh Hayeshiva of BMG, who inspired the klal with beautiful divrei bracha and divrei hisorerus. Other esteemed attendees included Horav Yeruchom Pitter shlit’a, Rabbi Mordechai Respler shlit’a, Rabbi Moshe Gelbwachs shlit’a, as well as choshuve members of the board of directors. Together with the yeshiva’s honored parents, grandparents, and beloved talmidim, each and every participant added to the ruach and geshmak of the event. The afternoon concluded with leibedik and uplifting singing and dancing enjoyed by all.

The Rosh Hayeshiva, Horav Moshe Silberberg shlit’a, spoke of Yeshiva Ohr Naftoli as an oasis where there is solely Torah without distraction, as a place where the bochurim are able to develop a true and deep Ahavas Torah through intensive and uninterrupted learning. Together with the incredible efforts of the Menahel, Horav Ahron Yosef Pitter shlit’a, and the choshuve rebbeim, Ohr Naftoli has grown into the vibrant Makom Torah it is today. Through the success of this campaign, the yeshiva should BE’H experience continued growth and hatzlacha in a setting that will enhance and promote continued learning and shteiging for years to come.