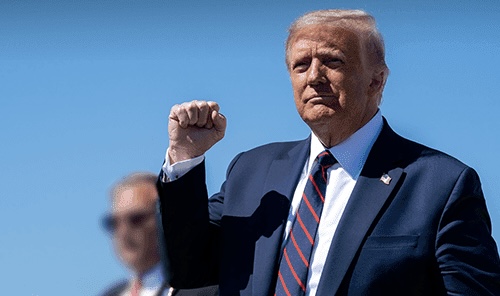 Speaking tonight at his resort in Mar-a-Lago before a crowd of hundreds of invited supporters, former President Trump announced he will be running for president again in 2024.

Trump, who was defeated by the current occupant of the Oval Office, President Joe Biden in the 2020 presidential election, made the announcement shortly after 9pm.

“In order to make America great and glorious again, tonight I am hereby announcing my candidacy for President of the United States,” he said.

With his entrance to the race – the first for the 2024 cycle – Trump will immediately become the favorite, although many will note that his clout may have been diminished with the unexpectedly poor showing by Republicans during last week’s midterm elections, including many candidates backed by the former president.

Republican candidates for Senate, including Mehmet Oz in Pennsylvania, Don Bolduc in New Hampshire, Blake Masters in Arizona and Adam Laxalt in Nevada all lost. Herschel Walker, the Republican nominee for Senate in Georgia, finished second and is headed for a December 6th. run-off against Democratic Senator Raphael Warnock.

However, with Florida Republican Governor Ron DeSantis’ stronger than expected victory last week, many in the Republican party have been pushing for the former Trump ally to be the party’s nominee for president in 2024.

In a statement released last week, Trump attacked DeSantis as an “average” governor, saying that DeSantis was “politically dead” until Trump endorsed him in 2018 and complained about DeSantis’ refusal to say whether he’ll run for president in 2024.

“Well, in terms of loyalty and class, that’s really not the right answer,” Trump said, disparaging the Florida governor as “Ron DeSanctimonious.”

Only one other president in U.S. history, Grover Cleveland, has returned to the Oval Office after losing a re-election bid.

Cleveland, who was born in Caldwell, New Jersey, served as the nation’s 22nd President after he won the 1884 presidential election. He then lost his re-election bid in 1888 but returned in 1892 – the same year Lakewood was founded – and won another term, serving as the country’s 24th president.

Herbert Hoover was the last one to try, unsuccessfully, in 1940.