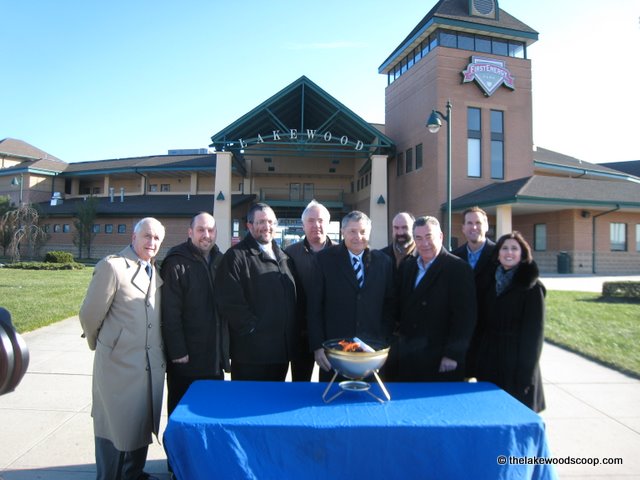 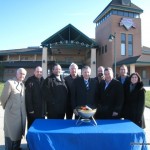 (PHOTOS & EXCLUSIVE VIDEO of the event, in extended article.) With the tenth and final bond payment of $1,838,546.00 to the bank this December, the Lakewood BlueClaws stadium finally belongs to the Township of Lakewood. What is significant about this milestone is that over a million dollars a year in UEZ funds will now become available for other economic development projects. Mayor Robert W. Singer says, “Our property taxes have not been affected at all by the construction or maintenance of the Lakewood baseball stadium. The stadium is a long-term investment for our town that will generate revenue for Lakewood for many years to come, and it is important to note that not one dollar of local tax money was used to pay for it. The construction of the $22 million stadium, one of the largest Urban Enterprise Zone projects ever undertaken in the state, was built with UEZ funds that came to the township through the 3 ½  percent sales tax program.”

When the 6,588-seat minor league baseball stadium opened in April 2001, it quickly became one of the economic engines driving a revitalization of Lakewood by providing employment and business opportunities for local residents and businesses.

Ten years later, the Lakewood baseball stadium is still having a positive economic impact and still drawing record-breaking crowds each year from all over New Jersey, New York, and Philadelphia. About sixty employees from Lakewood work either in the concessions’ department or in game-day operations, such as ushers and ticket takers.

In anticipation of owning the stadium, the township purchased a protective covering for the field that will allow the township to rent out the stadium and the use of the field without damaging it.  One way to generate revenue entails renting out the stadium for events, concerts, or any large gatherings, such as music festivals, graduations, or for visiting dignitaries.  The booking of shows, such as Wing Stock, Bob Dylan, and Willie Nelson, could means thousands of dollars alone for Lakewood in rental fees.

Did you know this about the BlueClaws:
1.      The Lakewood BlueClaws, a “single A” Minor League affiliate of the Philadelphia Phillies,  have won two South Atlantic League (SAL) championships: 2006, 2009

3.      The BlueClaws have led the league in attendance in all nine years of existence. They have had 91 crowds of over 8,000 in its nine years of baseball.

4.      Thirty former BlueClaws, including Ryan Howard and Cole Hamels of the Phillies, have reached the Major Leagues.