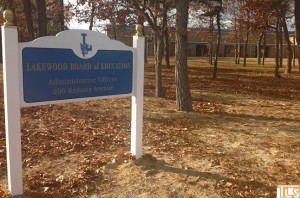 The Lakewood Board of Education will hold a special meeting tonight to discuss fiscal issues, including the crushing impact of numerous lawsuits successfully filed on behalf of public school students by Michael Inzelbuch.

The official notice released by the Board reads, “The purpose of this meeting is to discuss the Referendum for Facilities Projects, District Fiscal Issues, Pending Litigation and the School Calendar. The Board may take action during the Public Session regarding any of these topics.”

Specifically, sources have informed TLS that these significant issues while remnants of the action of the former Board are spiraling out of control as no real and effective plan has been formulated to deal with them.

When contacted by TLS for comment, Michael Inzelbuch would not specifically comment, but stated, “the real cheated story has been written, however, not by the press but by numerous judges, State officials, and facts.” He went on to state that “it’s even worse than you could imagine with employees testifying in Court that public school students rights are being thwarted by the Administration and methods of documentation allegedly being altered.”