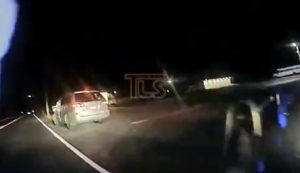 Below is the bodycam footage TLS obtained from the Howell police officer who ticketed a Lakewood driver for speeding.

For privacy reasons, TLS removed the conversation and driver’s identity.

Immediately upon approaching the vehicle, the driver can be heard stating “my wife is in advanced labor.” That is at the 1:25 mark in the video.

The cop responds, “Okay. Got your license, registration and insurance?”

After again explaining to the officer the urgency of the situation, the cop heads back to his vehicle to write the ticket.

At the 8:08 mark – 6 minutes and 43 second after the driver told the officer his wife was in advanced labor, the officer offered to call an ambulance.