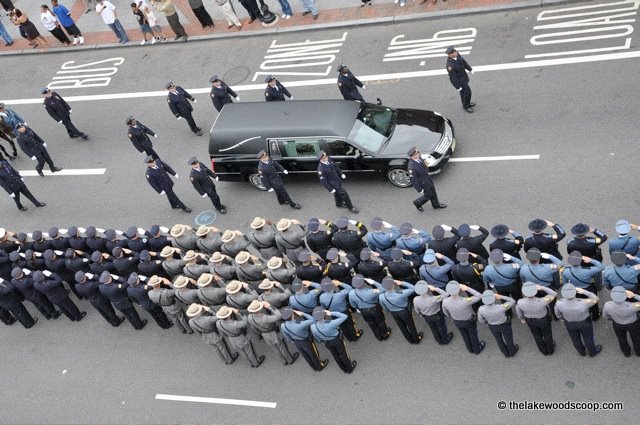 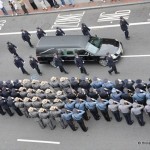 (File photo of funeral of Marc Anthony DiNardo, taken by LPD Officer Erik Menck for TLS. To view all photos from funeral, attended by several LPD Officers, click here). Assemblywoman Joan M. Quigley (D-Hudson) Thursday said she will re-introduce legislation to expedite the payment of accidental pension death benefits for the families of fallen police and firefighters. The bill stems from the nearly three-month-wait endured by the widow of Jersey City police officer Marc Anthony DiNardo, who was killed after being shot in July in a fierce gun battle. He left behind a wife and three young children who spent months battling through bureaucratic red tape before receiving his benefits.

The bill was approved 77-0 by the Assembly on Dec. 7 and was referred to the Senate State Government Committee where it did not receive a review and expired.

The legislation would provide that the accidental pension death benefits for police and firefighters be paid upon the filing of a certified death certificate and all properly completed claim forms with the Division of Pension and Benefits.

If the Police and Firemen’s Retirement System board of trustees determines that the accidental pension death benefit is not payable, the payment would cease and the beneficiary who received the payment would be required to repay within 90 days.

The bill (A-230) is co-sponored by Assemblymen Gary Schaer (D-Passaic) and Jack Conners (D-Burlington). Quigley said the measure has Senate backing from Senators Nicholas J. Sacco and Brian Stack (both D-Hudson).

“To have seen this family get caught in a bureaucratic mess was outrageous,” Quigley said. “This can’t go on and it has to be fixed. It was unacceptable and must not happen again. This bill would ensure it doesn’t and I will fight again to get it passed.” NJN/TLS