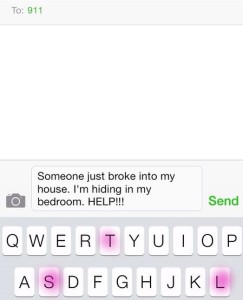 The sponsors said the ability to text 9-1-1 will be a vital service for New Jersey residents with communication disabilities and in emergencies where an individual is unable to talk or must be discrete.

“Almost everyone communicates by text these days,” said Benson (D-Mercer, Middlesex). “It makes sense that a person should also be able to text for help too. This will also help those with speech and other communication disabilities to more easily access these life saving services.”

“Enacting this legislation would allow for more lives to be saved,” said Pinkin (D-Middlesex). “9-1-1 systems must adapt to current trends in order to be the most effective in emergencies.”

“Time is crucial in an emergency. A matter of minutes can mean the difference between life and death,” said Rible, R-Monmouth and Ocean, a former police officer. “With so many people today owning cell phones, it’s only logical that 9-1-1 centers should be equipped to handle emergency texts. If an intruder is in your house, texting for help is probably the safest means of notifying emergency personnel of your situation.”

The bill provides that the 911 System and Emergency response Fee is to increase by 10 percent to equip 911 service facilities with the ability to process requests for emergency services sent via text message. The fee increase is to expire after a period of three years following the enactment of the bill.

Currently, the 911 System and Emergency Response Fee, which is used to fund the 911 system, is a $.90 monthly fee imposed on mobile service customers and telephone company customers in this state. This bill increases the monthly fee to $.99.

The bill was released by the Assembly Appropriations Committee.