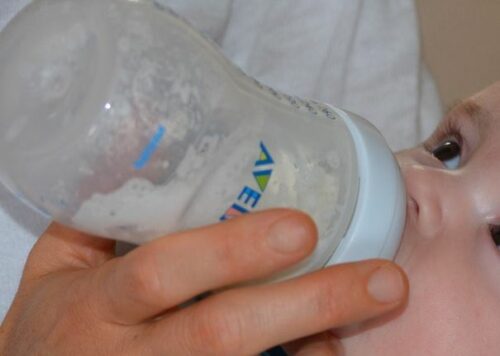 Parents across the country are panicking as the baby formula supply dries up.

Even trips to Howell, Brick, Jackson and Toms River stores like Shop-Rite, Stop and Shop, BJ’s, CVS, Walgreens and Walmart are experiencing a severe shortage and buying formula is limited to 1 to 5 cans at a time if it’s available at all.

The lack of baby formula has gotten so bad that some stores and other retailers have started limiting the amount some can purchase at a time.

Last month, CVS limited in-store and online purchases of baby formula to three per order. Target and Walgreens have maintained restrictions for several weeks. Reports in the media suggest some parents are responding to the shortages by even producing their own by  watering down current supplies, and rationing formula.

There’s no doubt about it, the baby formula shortage is intensifying in the United States, according to new Datasembly numbers.

The retail information provider reported that out-of-stock (OOS) rates continue to climb nationwide, rising to 43 percent in the week ending May 8. This is up from the 30 to 40 percent readings in April. 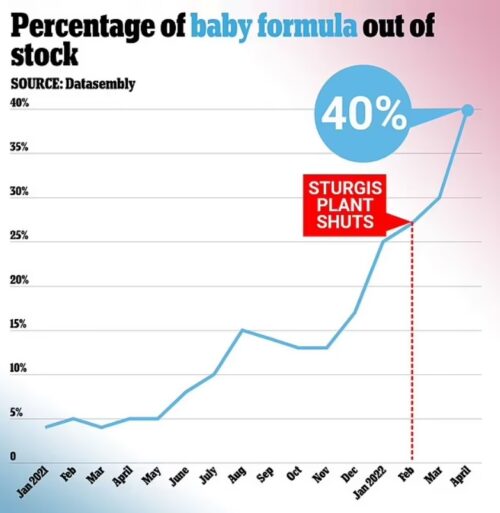 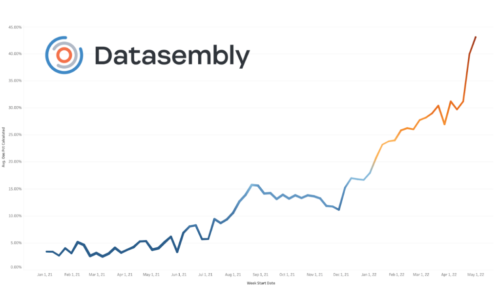 What About New Jersey?

As the nationwide baby formula shortage continues, unlike New Jersey, the state of Minnesota has created a list of WIC-approved substitutes for Similac formula products which are not available to New Jersey residents without medical documentation. Since WIC is not a government program, each state must contract with WIC separately.

“Biden is sending pallets of baby formula to the border to warehouses at the U.S.-Mexico border for immigrants who crossed into the U.S. illegally. Meanwhile, store shelves across America are empty and moms are being told they don’t know when more is coming in. Welcome to Biden’s America where American moms and dads are last,” Cammack posted a live video on Facebook, where a border patrol agent in Texas informed her that he had taken in pallets of baby formula for immigrants. She said that the children receiving the formula were not at fault but she expressed anger stating, “What is infuriating to me is that this is another example of an America last agenda. Pallets [of baby formula]”. 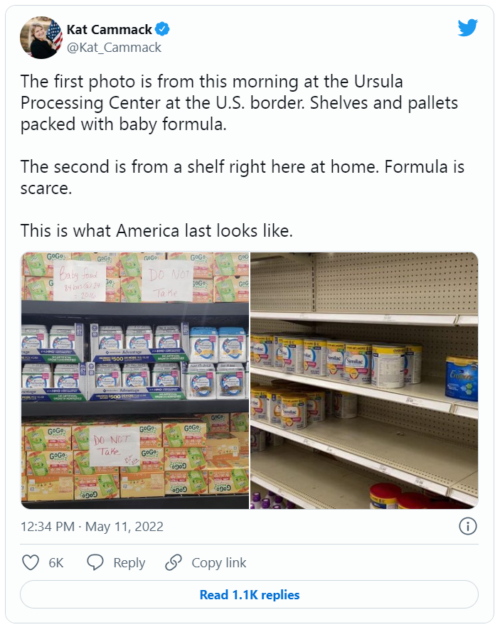 “The first photo is from this morning at the Ursula Processing Center at the U.S. border. Shelves and pallets packed with baby formula,” Cammack wrote. “The second is from a shelf right here at home. Formula is scarce.”

“The American government is sending by the pallet, thousands and thousands of containers of baby formula to the border,” she said in a video.

Ongoing supply chain disruptions are contributing to a nationwide baby formula shortage leaving many parents in fear as they struggle to find sufficient supplies. The Biden administration has faced significant backlash to take action to remedy the issue.

In a statement on its website on Wednesday, Abbott said the voluntary recall of baby formula involved “four complaints of Cronobacter sakazkii—a common environmental bacteria—in infants who consumed infant formulas produced” in the plant in Sturgis.

Abbott, in its statement, also said that “after a thorough review of all available data, there is no evidence to link our formulas to these infant illnesses.”

Representative Marjorie Taylor Greene also referenced “emerging” pictures from the border that she said showed that the Biden administration was sending pallets of baby formula there.

Even Border Patrol agents have been instructed not to take baby formula home for their own children while Lakewood Residents are caught in the meltdown.

The Rio Grande Valley Border Patrol Sector of U.S. Customs and Border Protection and the White House had neither comment nor confirmation of baby formula being sent to the border for immigrants.

Many states have lifted limitations on which brands are allowed by WIC but New Jersey is not one of them. Lakewood residents have driven to Pennsylvania where WIC is allowed only to find out that New Jersey residents are limited to their state of residency.

Some Lakewooders with relatives out of town, in states that have enacted waivers on brands that may be purchased with WIC have had them send formula to them in Lakewood although WIC only covers only the amount assigned per child, so you would have to pay the full price, which is more than people on WIC can afford in the first place.

The FDA has discouraged parents from making formula at home due to “very serious health concerns” for babies.

“The potential problems associated with errors in selecting and combining the ingredients for the formula are very serious and range from severe nutritional imbalances to unsafe products that can harm infants.”

Health experts warn that too much water for infants under six months could trigger seizures and brain swelling and dilute the calories.

Abbott, Reckitt Benckiser, Nestlé, and Perrigo Control Close to 90% of the Market

Earlier this year, Abbott Laboratories, a leading baby formula maker, recalled products sold under the Alimentum, EleCare, and Similac brands that were produced at their  Sturgis,  Michigan facility. Four children had become sick with bacterial infections, resulting in two deaths. Public health authorities encouraged shoppers to avoid buying formulas tied to the plant, although Abbott doesn’t believe there is a link between these illnesses and its formulas. In addition to Abbott’s recall, the baby formula shortage has been exacerbated by global supply chain issues,  pandemic induced consumer patterns, and soaring price inflation throughout the world.

According to the Centers for Disease Control and Prevention (CDC), only one-quarter of babies born in 2018 were breastfed exclusively in their first six months.

In recent years, the prevalence of breastmilk substitutes has been a source of controversy among public health experts. “The promotion of commercial milk formulas should have been terminated decades ago,” said Dr. Francesco Branca, director of the WHO Nutrition and Food Safety Department, in a statement last month. “The fact that formula milk companies are now employing even more powerful and insidious marketing techniques to drive up their sales is inexcusable and must be stopped.”
The global formula milk industry is now worth $55 billion.

Abbott announced that it will work closely with the FDA to restart operations within two weeks but the company projects that it could take six to eight weeks to get its products back on store shelves.

A ‘Life and Death’ Issue

President Biden met with infant formula manufacturers and retailers on May 12 to receive updates on the rapidly intensifying shortages across the country.

Following the meeting, the president announced additional steps to address the issue to get more infant formula on store shelves faster, including reducing red tape and boosting supply through increased imports. In addition, he urged the Federal Trade Commission and state attorneys general to tighten down on any infant formula price gouging.

Earlier, more than 100 House Republicans urged the administration and the FDA, in writing, to release data on the nationwide shortages and provide specific details on how they plan to address the issue.

“This issue is a matter of life and death, and it is time this administration treats it with the appropriate urgency it deserves,” the 106 Republican lawmakers wrote.

Rep. Elise Stefanik (R-N.Y.) says this is an example of Biden’s “failed leadership,” adding that the FDA didn’t have a plan to figure out how to address the supply chain crisis aspect of baby formula manufacturing.

“But it even goes back earlier than that, as a result of just the labor shortage in this country, the lack of accessing basic materials that are part of the manufacturing process,” she told the host of NTD’s “Capitol Report,” Steve Lance. “But what’s really struck me is the sheer incompetence of Joe Biden and House Democrats and frankly, failure to address any aspect of this.”

FDA Commissioner Robert Califf assured the public that “we are doing everything in our power to ensure there is adequate product available where and when they need it.”