Before Recess, House Members Speak Out Against Anti-semitism 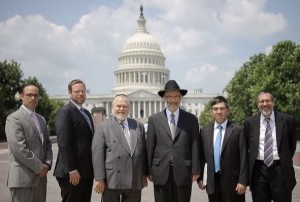 Chants of “Gas the Jews” and attacks on synagogues were “brazen acts of anti-Semitism,” declared Rep. Grace Meng (D-NY), prominent member of the House Foreign Affairs Committee. Calling anti-Semitism a “disease,” she added, “It is essential that Jews and non-Jews speak about this problem to their own communities, and we have to continue to encourage that here in Congress.”

So said Rep. Meng on the House Floor during a special session – known as a “special order” – she had arranged for congresspersons to address the issue of anti-Semitism. Just a few days earlier, Agudath Israel of America had sent delegations of its members to Capitol Hill to discuss critical issues facing Israel and the Jewish people.

A main focus of these meetings, which occurred during the latter part of July, was the alarming outbreak of virulent and violent anti-Semitism around the world. The idea for the “special order,” as well as other ideas, grew out of those meetings with Rep. Meng and others.

“These meetings were extraordinarily important,” noted Rabbi Abba Cohen, Agudath Israel’s Vice President for Federal Affairs and Washington Director. “While members of Congress had read about rabid anti-Semitic incidents in France and elsewhere, many were not aware of how numerous or widespread they were – or that they were occurring in the United States as well. It was clearly shocking to them.”

Joining in the “special order” were Democratic National Committee Chairperson, Rep. Debbie Wasserman-Schultz (D-NY), and Ranking Member of the House Subcommittee on the Middle East and Africa, Rep. Ted Deutch (D-NY), both of whom expressed alarm at the rise of anti-Semitism and condemned the violent acts directed toward Jews abroad and at home, including in their very own districts.

The representatives recognized the importance of bringing this issue to the House Floor. Rep. Wasserman-Shultz asserted that “it is only through shining a light on anti-Semitism that we are going to be able to help educate people and fight back.”

They also made the point that these anti-Semitic incidents are not “political statements” or in any way related to Israel’s actions against Hamas. “It is clear, unfortunately, that many people are using the current conflict, a façade of anti-Zionism, or anti-Israel sentiment, as a thin veil to cover up much more deep-seated hatred toward Jews,” Rep. Deutch stated.

The issue of anti-Semitism was addressed from a different angle earlier in the day by Rep. Chris Smith (R-NJ), Co-Chairman of the Helsinki Commission and the Bipartisan Coalition for Combatting Anti-Semitism. Rep. Smith, who had warmly received the Agudath Israel delegation the week before, took to the House Floor and elaborated on the anti-Semitism found in the Hamas Charter itself, which, in essence, lays at the foundation of its anti-Israel and anti-Jewish terror.

The Helsinki Commission Chairman pointed specifically to the Charter’s comparing Israeli society with Nazism, making reference to the anti-Semitic libel called the “Protocols of the Elders of Zion,” and charging that the Jews are responsible for a massive conspiracy that “aims at undermining societies, destroying values, corrupting consciences, deteriorating character, and annihilating Islam.”

“From its origins to the present day, the Hamas movement has been poisoned by anti-Semitism, and the murderous nature of this evil has not diminished. It has got worse. Jews today die because of it.” Rep. Smith concluded.

“Cancer” is how Rep. Hakeem Jefferies (D-NY), the Brooklyn congressman who also welcomed the Agudath Israel representatives, stated the next day on the House Floor. “Anti-Semitism is not a legitimate form of criticism. It is a cancer that needs to be stamped out.”

Reflecting the views of Agudath Israel, and the many House members it has communicated with, Rep. Jefferies summed up, and “I urge this Congress to speak out to condemn and to do everything possible to eradicate this outbreak.”

When the House returns in September it will likely have that opportunity. The day before the August recess, Rep. Jerrold Nadler (D-NY) and Rep. Peter Roskam (R-IL) introduced H.Res. 707, which among other things condemns all forms of anti-Semitism, calls on the Secretary of State to maintain the fight against anti-Semitism as an important U.S. foreign policy priority and urges governments to make sure that adequate laws are in place to punish anti-Semitic violence. [TLS]