“Be Consoled”: Submitted with the Tefiloh that it Never Again Be Needed – By Rabbi Yosef C. Golding, CEO, Misaskim 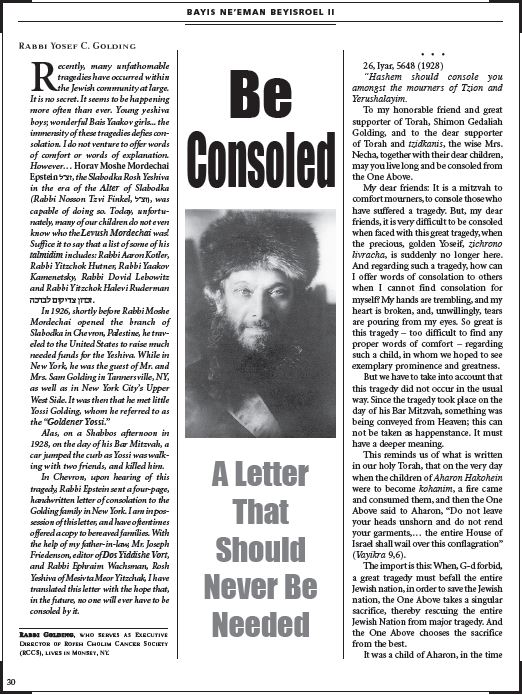 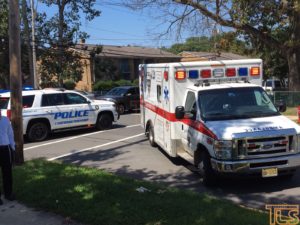 The very recent tragedies in Lakewood, Monsey, and elsewhere, defy human comprehension. Who cannot feel the searing pain of the grieving families? Yet, we Torah Jews have been taught that nothing in this world is happenstance. These tragedies reminded me of a similar story that took place almost ninety years ago, in which my uncle was killed on the day of his Bar Mitzvah.

I do not, and cannot, venture to offer words of comfort or words of explanation. However…

…Horav Moshe Mordechai Epstein ZT’L, the Slabodka Rosh Yeshiva in the era of the Alter of Slabodka, was capable of doing so. Today, unfortunately, many of our children do not even know who the Levush Mordechai was! Suffice it to say that a list of some of his talmidim include: Rabbi Aaron Kotler, Rabbi Yitzchok Hutner, Rabbi Yaakov Kaminetzky, Rabbi Dovid Lebowitz and Rabbi Yitzchok Halevi Ruderman Zichron Tzaddikim L’veracha.

In 1926, shortly before Rabbi Moshe Mordechai opened the branch of Slabodka in Hebron, Palestine, he traveled to the United States to raise much-needed funds for the Yeshiva. While in New York, he was the guest of Shimon Gedaliah and Necha Golding in Tannersville, NY, as well as in New York City’s Upper West Side. It was then that he met little Yossi Golding who he referred to as the “Goldener Yossi.”

Alas, on a Shabbos afternoon in 1928, on the day of his Bar Mitzvah, a car jumped the sidewalk as Yossi was walking with two friends, and killed him.

In Chevron, upon hearing of this tragedy, Rabbi Epstein sent a four page, handwritten letter of consolation to the Golding family in New York. I am in possession of this letter, and have often-times offered a copy to bereaved families. With the assistance of my (late) father-in-law, Reb Yosef Friedenson a”h, former editor of Dos Yiddishe Vort, and Harav Ephraim Wachsman shlit”a, Rosh Yeshiva of Mesivta Meor Yitzchak, I have translated this letter with the hope that, in the future, no one will ever have to be consoled by it. Please feel free to copy and disseminate it if, chas v’shalom, the need arises.

“Hashem should console you amongst the mourners of Tzion and Yerushalyim.

To my honorable friend and great supporter of Torah, Shimon Gedaliah Golding, and to the dear supporter of Torah and tzidkonyus, the wise Mrs. Necha, together with their dear children, may you live long and be consoled from the One Above.

My dear friends: It is a mitzvah to comfort mourners, to console those who have suffered a tragedy. But, my dear friends, it is very difficult to be consoled when faced with this great tragedy, when the precious, golden Yoseif zichrono livracha is suddenly no longer here. And regarding such a tragedy, how can I offer words of consolation to others when I cannot find consolation for myself? My hands are trembling, and my heart is broken, and, unwillingly, tears are pouring from my eyes. So great is this tragedy – too difficult to find any proper words of comfort – regarding such a child, in whom we hoped to see exemplary prominence and greatness.

But we have to take into account that this tragedy did not occur in the usual way. Since the tragedy took place on the day of his Bar Mitzvah, something was being conveyed from Heaven; this cannot be taken as happenstance. It must have a deeper meaning.

This reminds us of what is written in our holy Torah, that on the very day when the children of Aharon HaKohein were to become Kohanim, a fire came and consumed them, and then the One Above said to Aharon, “You do not leave your heads unshorn and not rend your clothes, the Jewish Nation shall wail over this conflagration.”

It was a child of Aharon, in the time of “Bekarvasam lifnei Hashem – when they drew close to Hashem” – in that loftiest moment, when a korban can save the Jewish Nation. And Hashem says to Aharon HaKohein, “This child does not deserve this tragedy, but the Jewish Nation does, and they must cry. And know, Aharon, that your children are the sacrifice needed for the sake of the Jewish Nation.”

At that point, “Vayidom Aharon.” And Aharon was personally consoled.

It is similar to nations of the world who, when faced with tragedy, send out their best sons to give their lives to save the Fatherland.

Dear friends: our Holy Chazal tell us that when Hashem chooses a tzaddik on behalf of the generation, to save the generation, he takes the sacrifice from the tinokos shel beis rabban, a child from the yeshiva, and he is the savior for that generation. When, G-d forbid, the sins of the generation are gathered, like the sin of desecrating the Shabbos which is punishable by stoning, and other similar offenses for which the greatest punishments are deserved, He takes a singular sacrifice from the yeshiva community, and with this, the entire generation is saved from calamity.

I declare to you, precious parents, my heart personally feels along with your “parents’ hearts” regarding this tragedy – specifically with you, Mrs. Golding, a “mother’s heart,” as you are touched by such a tragedy. But Hashem showed through the fact that this calamitous tragedy happened “Bekarvasam lifnei Hashem“, in the time when he was to become a Bar Mitzvah, and at that time the generation needed a korban. G-d forbid, the account of the generation’s sins became full – Chillul Shabbos and other, similar devastating transgressions – necessitating, G-d forbid, a punishment to the entire generation. Hashem, therefore, took the precious Yosef, z”l, your precious son from amongst the tinokos shel beis rabban, from the yeshiva children, from such a precious home, from you who is a unique tzaddeikes of this generation, may Hashem give you long life.

From you, He chose the korban; he [Yoseif] received the punishment, thereby saving the entire generation from calamity. To your fruma heart I implore, be consoled by this knowledge that your precious son was a sacrifice for the entire Jewish Nation – you are parents who relinquished their son’s life for the “Fatherland,” thereby saving the land.

But you can be consoled by the great zechus that your son, zichrono livrocho, has in the World Above, the True World, in which, through his punishment, he merited to save the entire generation. Do as Aharon did. He stopped moaning, knowing that his children were most endeared to the One Above, and He took them for the sake of the generation.

Your precious, fruma hearts should be strengthened and it will be a zechus just like the Akeida. And Hashem will bless you that you will never know from such pain, only nachas from all your precious children.

(He then writes a few personal lines to a few individual members of the family and ends):

Be well, be consoled.

Your devoted friend who hopes only for your good,

(This translation originally appeared in The Jewish Observer)