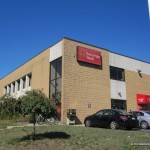 A customer at Sovereign Bank allegedly received a counterfeit $100 bill from the bank this afternoon. The customer tells TLS he withdrew several hundred dollars from the Madison Avenue Bank this afternoon, and when he pulled out one of the bills to use it, he noticed it was fake.

The customer called police to complain, but was told that since he had left the bank premises, there was nothing they could do and the money could not be refunded.

Police however, took the fake $100 bill from the customer and are investigating the incident. TLS-CCP.