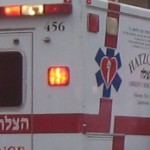 ASSAULT: A Bachur walking on Ocean Avenue early this morning, was assaulted, officials confirmed to TLS. Sources say, the Bachur, 18, was walking in the area of Pearl Street at about 3:15 AM, when two Hispanic males approached him from behind. The men reportedly hit the Bachor on his head with a stick, and then fled the area.

Hatzolah was called, and multiple Hatzolah members responded to find the victim bleeding heavily with a gash to his head.

The victim was transported to KMC in stable condition.

A description of the suspects is unavailable at this time. TLS-CCP/TLS-00.