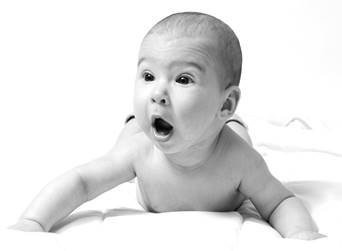 Have you been hearing weird music coming from the nursery? And it stops when you come into the room to check it out? Sounds like it’s coming from the nanny cam? A freaked out mom in Minnesota requested anonymity when she told her story to KTTC TV. She faced the baby cam toward the wall and left but when the parents used it to check on the little darling a little later, the camera was turned away from the wall facing the closet! It turns out that the wireless nanny cam was possessed! In possession of hacker who took over the device to spy on babies. Ewwwh!

Even though this was a password protected webcam, it was hijacked and under the complete control of some monster overseas. Most of these cameras are protected by a password but many parents never change the default one. In fact many IP cameras don’t have any password protection at all.

“We were able to track down the IP address through the Foscam software, and found out that it was coming from Amsterdam”, the mother told KTTC TV.

She was able to trace the IP address of the intruder to a site that had thousands of streams coming from cameras just like theirs all over the world. She said,

“There’s at least 15 different countries listed and it’s not just nurseries – it’s people’s living rooms, their bedrooms, their kitchens. Every place that people think is sacred and private in their home is being accessed.”

Last November a site named Insecam (insecure camera?) claimed to tap into the direct feeds of hundreds of thousands of private cameras secured with default passwords from 152 countries. Eventually, the couple found their baby’s crib among thousands of other images made searchable by room type and/or country. The mom went on to say, “This isn’t just, you know, Rochester, Minnesota. You can literally just sort by whatever country suits your fancy, and whatever room suits your fancy. It’s pretty sick.” Care to search by Lakewood, NJ, USA? Well you can.

Ultimately, the family decided to remove the cameras. Before they did, however, they connected one so the TV station could produce its story. In less than an hour the new pictures of their crib were online.

Events like this are more common than we know. One camera manufacturer, Foscam, now has its newer models force users to change the default password.

The older Foscam cameras may need a firmware upgrade available from their website at http://foscam.us/firmware.html Check your camera manufacturer’s site for updates.

Unprotected webcams can be an open invitation to your home and private life for anybody, anywhere to come and go as they please. In February, a nanny camera in Texas started to comment about how a mom should be changing her 1 year old baby’s diaper. In 2013 an anonymous cyber-cretin commandeered a baby monitor to spy on a 2 year old girl and scream obscenities at the child. Then they swiveled the camera on her shocked parents as they came in the room, spewing out a variety of insulting names.

Default passwords are a definite no-no, no matter which camera you have and a weak one is just, ahem, a pacifier.

For some great ideas on making secure passwords, check out this TLS article on How To Create The Best Passwords With The Least Effort