ATV driven by a juvenile strikes police officer in Brick 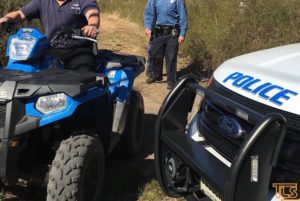 A Brick police officer was struck by an ATV during an attempted traffic stop, police said.

At 1:00pm on Thursday, August 8th, Officer Brian Ulman was investigating a minor complaint in the neighborhood of 19th Avenue and Walnut Drive, where there is roadwork going on in this neighborhood and several streets are coned off for the construction.

While responding, Officer Ulman witnessed two male subjects on ATVs, a quad and a two-wheeled dirtbike, drive through the coned area into the work zone. Officer Ulman pulled behind the ATVs to stop them. When the drivers of the ATV saw a different officer who was working at the construction site up ahead, they both stopped and turned around to find Officer Ulman behind them, with his overhead lights activated.

At that point, Officer Ulman and other officers established a perimeter and began searching for the subjects. Police posted the incident on social media for help in identifying the subjects.

Slightly before 6:00 pm, the two subjects turned themselves in, both accompanied their parents. The subjects were juvenile males and were charged with Obstructing the Administration of Law, Reckless Driving, Operating Unregistered Vehicles, and Failure to Wear Helmets While Operating an ATV.