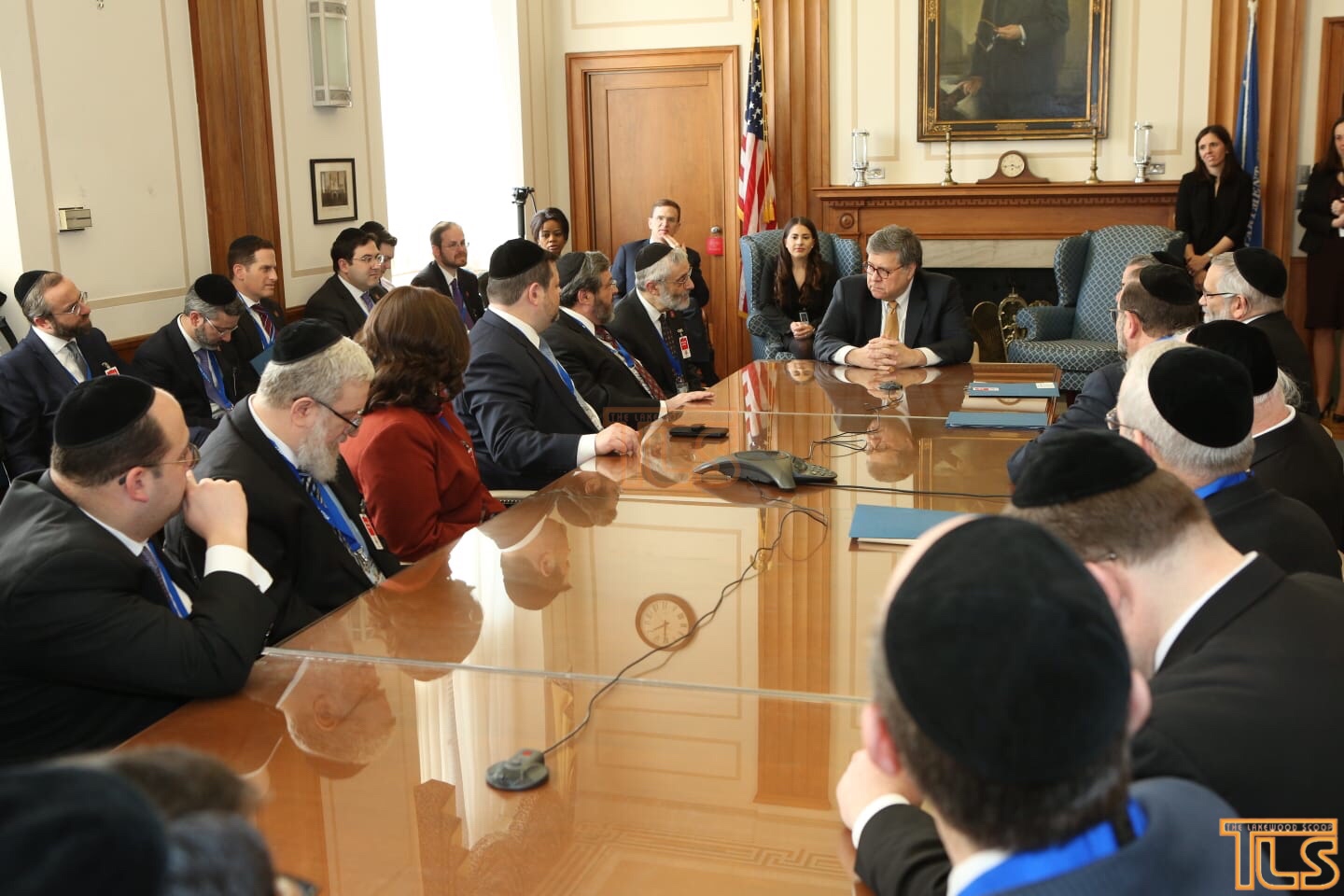 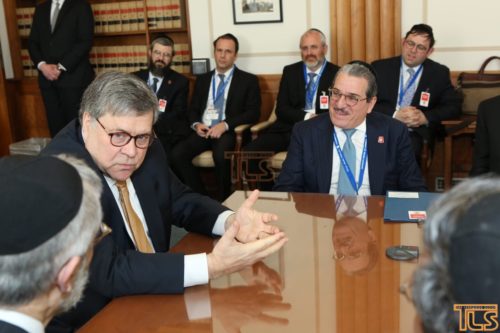 Good Morning. Thank you all for being here. Thank you, Jeff, for that introduction. I would like to offer a special thanks to Rabbi Soloveichik for his benediction. I also want to thank everyone who helped to bring this summit together – in particular, Larry Rothenberg, Lindsey Freeman, and Katie Crytzer from the Office of Legal Policy; Omeed Assefi from the Civil Rights Division; and Brian Pandya and Patrick Davis from the Office of the Associate Attorney General. Finally, let me say thank you to Treasury Secretary Steve Mnuchin, Education Secretary Betsy Devos, Special Envoy Elan Carr, and FBI Director Chris Wray, who are joining us here today for this summit.

Today’s program includes a great set of panels and speakers. For one thing, you will hear throughout the day from federal officials across the Administration about our efforts to combat anti-Semitism. I know that for me and for the Department of Justice, this is an important priority.

I am deeply concerned about the rise in hate crimes and political violence that we have seen over the past decade. And this trend has included a marked increase in reported instances of anti-Semitic hate crimes. We can all agree this trend is intolerable. We must have zero tolerance for violence that is motivated by hatred for our fellow citizens whether based on race, sex, or creed. Anti-Semitic violence is especially pernicious because it targets both Jewish ethnic identity and religious practice.

The most ancient and stubborn form of racism throughout Western History has been anti-Semitism. The causes have varied. At various times it has been driven by religious intolerance, cultural differences, economic envy, or ideological dogma. Sometimes those disappointed with their own lot in life seize on conspiracy theories to blame the Jewish people for their own discontent. Sometimes political factions competing for power find in the Jewish people a convenient scapegoat to unify and inflame their base.

Hostility or prejudice against the Jewish people has manifested itself in the organized violence of pogroms, expulsions, and massacres. Within living memory, these genocidal acts reached the unimaginable scale and evil of the Holocaust. In the United States today, we do not have state-organized violence. But increasingly we are seeing hate inspired violence against the Jewish community perpetrated by individuals and groups.

This past year in particular, the entire Nation saw the evil fruits of anti-Semitism in Pittsburgh at the Tree of Life Synagogue and in California at the Chabad of Poway. In both instances, gunmen motivated by hatred against Jews opened fire, killing worshippers and injuring others. We were all horrified by these attacks. Federal, state, and local law enforcement responded quickly and decisively.

Of course, it is one thing for the Nation to pull together in condemning anti-Semitism when confronted with front-page stories about horrific shootings, as in Pittsburgh and Poway. But far too often, Jews and Jewish communities in America suffer outside the spotlight. New York City, this past year, has seen a sharp uptick in attacks on Orthodox Jews, particularly in the Crown Heights neighborhood. People are attacking Jews in the streets and vandalizing synagogues. In Massachusetts in March, vandals desecrated 59 gravestones in a Jewish cemetery, knocking over headstones and scrawling swastikas and hateful graffiti. While the tragic attacks in Pittsburgh and Poway appropriately drew national attention, these attacks and others like them in communities across the country are, sadly, less well-known outside the Jewish community. But they form the daily background of concerns about security and safety that many in the Jewish community feel. The Nation as a whole must be aware of these concerns and reject the forces that motivate them. As Attorney General and a fellow citizen, I want to assure the Jewish community that the Department of Justice and the entire federal government stands with you and will not tolerate these attacks.

Anti-Semitism in the United States manifests itself in many ways other than outright violence. Prejudice is often reflected in zoning laws designed to exclude Jews from residing in particular communities. It is also manifest in the harassment of Jewish individuals and businesses. That is also why today is about far more than criminal prosecutions. We need to combat anti-Semitism on all fronts, as a government but also as a society. We are therefore grateful that today’s summit will include thoughtful discussions with several outside contributors who have been gracious enough to join us.

The first panel will focus on combatting anti-Semitism while respecting the First Amendment. Hate-crime and civil-rights prosecutions are important tools but they cannot solve the problem on their own. Hearts and minds must be changed, but that is not always a task to which the government is particularly well-suited. We have a legal obligation to respect the free speech rights of even despicable speakers and our harshest critics. But lines can be drawn by our society, sometimes easily and sometimes not so easily, between that commitment and repudiation of anti-Semitism.

Another panel will focus on the problem of anti-Semitism on campus. On college campuses today, Jewish students who support Israel are frequently targeted for harassment, Jewish student organizations are marginalized, and progressive Jewish students are told they must denounce their beliefs and their heritage in order be part of “intersectional” causes. We must ensure – for the future of our country and our society – that college campuses remain open to ideological diversity and respectful of people of all faiths.

I think of the various forms of anti-Semitism as very much like different kinds of cancer. A healthy body with a strong immune system can have success in preventing cancers from emerging and spreading. But if the immune system weakens cancer can emerge. Some might be localized. But others can rapidly metastasize and become systematic. Like a physical body, a body politic must have an immune system that resists anti-Semitism and other forums of hatred.

What is the state of our immune system within the American society? In a pluralistic society like ours, I think the ability to resist hate comes from cultivating a civil society that, on the one hand, nurtures the freedom of each group to pursue their faith and distinctive way of life, while, at the same time, fostering the ties that bind us together into a genuine broader community.

My concern today is that under the banner of identity politics, some political factions are seeking to obtain power by dividing Americans. They undermine the values that draw us together, such as shared commitment to our country’s success. This is the breeding ground for hatred, and we must reject it.

What is the competing vision? I am reminded of something that happened two months after 9/11.

An Americans Airline flight with 260 souls aboard took off from JFK, went wildly out of control over Jamaica Bay, and crashed into the small Belle Harbor neighborhood on Rockaway in Queens. The community had just completed burying its victims of 9/11 – 50 of them – the highest concentration of victims of any neighborhood of New York. All onboard the American flight died, as did five people on the ground. Many houses were consumed by fire.

A news report on the incident is always stuck in my mind. It involved a man-on-the-street interview of a life-long resident of Belle Harbor. With fires raging behind him, he was distraught, but unbowed, as he assured the reporter that Belle Harbor would surmount this latest tragedy.

Is there a better description of the Framers’ aspiration of “E Pluribus Unum?”

We are a pluralistic Nation composed of very distinct groups, each bound together by ethnicity, race, or religion – each group proud of its identity and committed to its faith and traditions. Yet despite these differences, we can be bound together into a broader community. Not one that seeks to grind away our distinctive identity. Not one that seeks to overbear our religious commitments, which must be paramount. But one that respects, indeed delights in, the freedom of each of us that give meaning to our lives – that help us understand our place and our purpose in this Creation.

This real sense of community cannot be politically mandated. It arises from the genuine affinity, affection, and solidarity that grows out of a shared patriotism and that spontaneous feeling of fellowship that arises from a shared sense of place, shared experience, and common local attachments. These bonds are the surest safeguard against racial hatred, including anti-Semitism.

So with that, I would like to thank you all again for being here. Allow me to conclude with a few lines from the letter that President George Washington wrote to the Jewish congregation in Newport, Rhode Island, following a visit there in 1790:

May the children of the stock of Abraham who dwell in this land continue to merit and enjoy the good will of the other inhabitants – while ever one shall sit in safety under his own vine and fig tree and there shall be none to make him afraid.