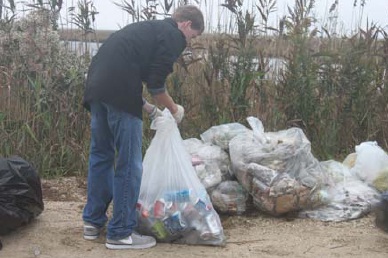 Department of Environmental Protection Commissioner Bob Martin and nearly 1,000 DEP staff members will join as many as 4,000 volunteers from numerous local groups – including students from dozens of schools, environmentalists, businesses, and local government leaders – in the second Barnegat Bay Blitz watershed trash and debris cleanup tomorrow, May 9.

“The Barnegat Bay Blitz is grassroots environmentalism at its finest,” said Commissioner Martin. “By raising public awareness about the complex ecological problems the bay faces, the Barnegat Bay Blitz is vital to the Christie Administration’s 10-point comprehensive restoration plan for the bay. I am particularly excited by the involvement of schools and their students. Our youth are our best hope for the future of the bay.”

The inaugural version of the cleanup in October was a huge success, with more than 2,400 volunteers collecting tens of thousands of pounds of trash and debris over a week-long period.  Even more impressive was a large turnout of volunteers on the primary day of the cleanup despite torrential rain.

On Wednesday, Commissioner Martin will join DEP staff and volunteers in picking up trash at several locations in the watershed. The Blitz will run from 8 a.m. to dusk, rain or shine.

The cleanups target a wide variety of locations, including wetlands, stream banks, stormwater discharge points, school grounds, trails, docks, areas around bulkheads, and the bay itself.

“We’re looking forward to much greater numbers of participants and even larger volumes of trash and debris to be collected this time around,” said DEP Blitz coordinator Lynette Lurig.

“Support for the Blitz is snowballing, taking hold in all corners of the watershed and among a wide variety of people,” added Katie Barnett, also a DEP event coordinator.

As many as 1,700 people – many of them schoolchildren – will be working on cleanups in and around Toms River alone.

Volunteers are coming from all 37 municipalities in the 660-square-mile watershed, which encompasses 33 municipalities in Ocean County and four in Monmouth County. The bay is suffering from degraded water quality caused by many factors, including excessive algae growth caused by nutrients from fertilizers and other sources.

The trash that volunteers collect will be turned over to local public works departments for proper disposal. Much of it, such as bottles and cans, will be recycled. TLS.