Arrests Made In Egg Attacks, Charged With Bias Intimidation And Harassment For Targeting Jewish Community 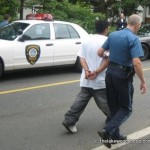 As first reported on TLS on Thursday evening, several residents were attacked with eggs by occupants of a white vehicle. Police Chief Rob Lawson has just informed TLS that several arrest have been made in the case and the suspects have been charged with Bias Intimidation and Harassment. The following is the case made against the suspects: ON 05/19/2010, AT APPROXIMATELY 2000 HOURS, REPORTS CAME INTO LAKEWOOD POLICE DEPARTMENT OF ASSAULTS OF PERSONS WALKING ON EAST COUNTY LINE ROAD NEAR PARK AVENUE. OFFICER JUSTIN PEDERSON FURTHER INVESTIGATED THOSE REPORTS AND FOUND FIVE VICTIMS WHO WERE STRUCK BY EGGS FROM PERSONS TRAVELLING PAST THEM IN A WHITE VEHICLE. ASSISTED BY OFFICERS PATRICK KEARNS, OFFICER KEVIN SEUNATH, AND OFFICER ROBERT SHIMONOVICH THEY ACERTAINED THAT A WHITE VEHICLE WITH 3 TO 4 OCCUPANTS WAS RESPONSIBLE AND A NJ REGISTRATION NUMBER WAS OBTAINED AND TRACKED BACK TO AN OCCUPANT OF JACKSON, NJ. WORKING WITH JACKSON PD, TWO OCCUPANTS OF THE SUSPECT VEHICLE WERE FOUND AND RETURNED WITH POLICE TO LAKEWOOD PD.

DET. WEXLER WORKING WITH THE OCEAN COUNTY SHERIFFS DEPARTMENT WARRANT DIVISION GAINED THE FULL IDENTITY OF THE THIRD SUSPECT. THE SUSPECTS HAD BEEN ALLEGED TO HAVE TRAVELLED TO A STORE IN BRICK NJ FOR THE PURPOSE OF OBTAINING EGGS TO THROW AT PERSONS OF THE ORTHODOX JEWISH FAITH IN LAKEWOOD, NJ

AS A RESULT OF THE INVESTIGATION THE FOLLWING PERSONS WERE CHARGED WITH BIAS INTIMIDATION;

AS A FURTHER RESULT OF THE INVESTIGATION THE FOLLOWING PERSON WAS CHARGED WITH BIAS INTIMIDATION AND HARASSMENT WHILE BEING ON PROBATION AUTHORIZED BY THE SUPERIOR COURT OF NJ;


On Friday May 21, 2010 additional incidents occurred in which eggs were thrown at Orthodox Jewish Residents of Lakewood. These incidents are being investigated and when the suspects are identified, they also will be charged with Bias Intimidation 2C:16-1, a 4th degree crime, punishable by up to 18 months in jail and a $10,000 fine.

The vast majority of these crimes are being committed by juveniles and young adults from out of town who think that this kind of activity is a fun thing to do. I view this as a very serious offense, even if the victim is not physically injured, the psychological impact can be profound causing prolonged distress to the victim. Any persons caught harassing any of our residents based upon a person’s race, color, ethnicity, religion, handicap or gender will be prosecuted to the fullest extent possible under the law.