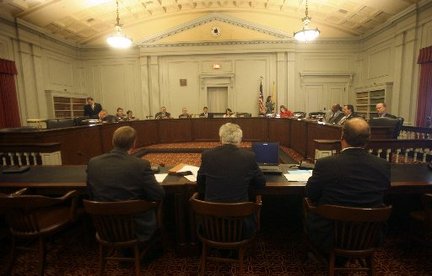 After a week of Gov. Chris Christie and former Gov. Jon Corzine sniping over the health of New Jersey’s budget, a nonpartisan legislative office today said Christie’s $1.3 billion projected revenue shortfall is reasonable. Through the end of the year, the state is looking at a $2 billion deficit from revenue and spending — though April’s income tax collections could swing the results wildly in either direction, said David Rosen, the budget and finance officer for the Office of Legislative Services, which works for the governor and Legislature.

Still, Rosen said that while he has not seen exact figures, Christie’s estimate of a $1.3 billion revenue shortfall on the $29 billion budget is possible, as is a potential need for more than $668 million in extra spending.

“It’s not an unreasonable number to have on the table for an estimate,” Rosen said at an Assembly Budget Committee hearing when asked about Christie’s figures.

Christie last week blasted former governor Jon Corzine for leaving a “parting gift” of an undisclosed $1.3 billion budget gap, while a Corzine spokesman said the administration had, in fact, exited with a balanced budget and a $496 million surplus. Rosen said today the two were arguing over different sets of numbers.

“If we’re not comparing apples and oranges, it’s Macintosh versus Granny Smith, at least,” he said.

Corzine’s calculations included patches that Christie may not want to use.

Rosen said although Corzine’s declaration of a surplus could be right, the numbers only matter at the end of the year when the budget is required by law to be balanced.

Rhetoric on both sides was toned down today compared with last week.

The governor said Rosen’s testimony validates his administration’s budget projections, but he did not dwell on the topic.

“That should put that conversation to rest,” Christie said.

Josh Zeitz, a spokesman for Corzine, acknowledged the men were using different figures, but he disputed Christie’s characterization of Corzine as a poor budget steward.

Current and projected tax collection numbers guide spending decisions by the Legislature and governor. Before leaving office, Corzine had proposed $948 million in cuts and implemented some of them.

Christie said he plans to identify more than $1 billion in cuts to the current budget within the next week to 10 days and implement some by executive action while asking the Legislature to act on others. Star Ledger.