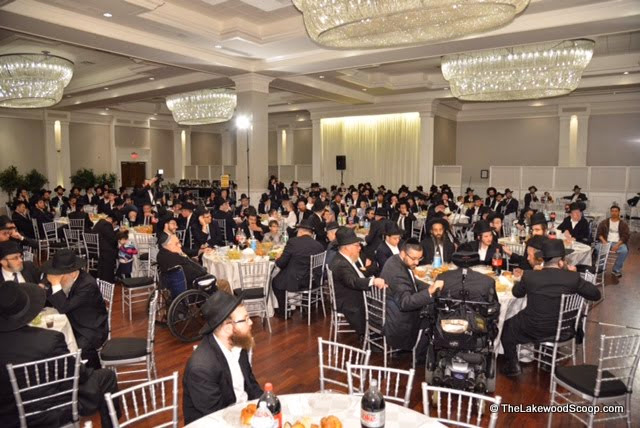 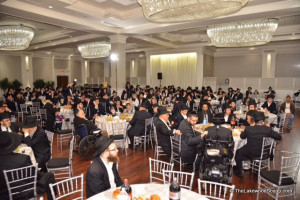 By: Shimmy Blum. It was the day after Yom Kippur, and yidden across the world celebrated a poignant milestone in their connection with Torah and mitzvos. With the completion of Maseches Chagigah, those learning Daf Yomi have completed Seder Mo’ed, the second of the six Sedarim – leaving 1,917 dafim remaining until the next Siyum Hashas, b’ezras Hashem.

At four special Siyumim coordinated by the Daf Yomi Commission of Agudath Israel of America, the feelings of accomplishment and joy were palpable. The Siyumim in Chicago, Cincinnati, Lakewood and Passaic were all well attended by local Daf Yomi learners. Leading rabbanim and marbitzei Torah in each of the respective communities graced the dais, and shared words of chizuk and inspiration.

The largest event took place in Lakewood, NJ, in Ateres Reva hall. A delicious hot dinner was served, and live music and dancing added to the festive ambiance. Rabbi Avi Schnall, executive director of Agudath Israel of New Jersey, opened the event, elaborating upon how the neshamos and lives of all yidden are connected through Torah learning, especially when they learn a common limud on a common schedule.

Rabbi Gedaliah Weinberger, chairman of the Daf Yomi Commission of Agudath Israel of America, explained how Torah learning encourages ahavas Yisroel, which is of particular importance at this time of the year. The Siyum was made by Harav Yehoshua Krupenia, shlit”a, Rosh Kollel of Bais Medrash Govoha, a longtime Daf Yomi Maggid Shiur. Rav Krupenia then expounded upon the protection from harm that Torah and mitzvos offers every yid.

Rabbi Shlomo Lowy, shlit”a, Rav of Khal Presidential Estates – Sefard, made the has’chala on Maseches Yevamos – Seder Nashim. With poignant anecdotes, Rabbi Lowy highlighted the value and inspirational powers of Torah learning, and how that motivates yidden to dedicate themselves to learning a full Daf each day, despite their strenuous schedules. The Lakewood Rosh Yeshiva, Harav Malkiel Kotler, shlit”a, spoke of the greatness of making a Siyum, and how that transforms the entire persona of the mesayem. “Acquiring Torah is called a ‘yerusha,'” said Rav Malkiel. “It forms a bond with the person and makes him ‘derhoiben’ in everything he does.”

The Rosh Yeshiva of Philadelphia, Harav Shalom Kamenetsky, shlit”a, a special guest speaker, spoke about how the daled minim symbolize bringing together yidden from all walks of life. Daf Yomi accomplishes that and, furthermore, inspires yidden to advance in their overall state of yiddishkeit. “Is there any bigger ‘kvias ittim laTorah’ than Daf Yomi?,” Rav Shalom asked. The event culminated with words from Rabbi Meir Boruch Turin, shlit”a, a popular local Daf Yomi maggid shiur. Rabbi Turin conveyed the sense of accomplishment one has after being able to follow through on a long term Daf Yomi commitment.

A special address was delivered by Harav Meir Stern, shlit”a, Rosh Yeshiva of Yeshiva Gedola of Passaic. Rav Stern recited the words of Ohr Hacha’im Hakadosh, who said that Torah learning is one of the three pillars of keeping the Torah, followed by avoiding mitzvos lo saaseh and performing mitzvos asei. Torah learning is the first and foremost of the pillars, and is the first aspect for which a yid must do teshuva. On the first day following the aseres yemei teshuva, Rav Stern related, “Teshuva doesn’t have a kiyum without proper Torah learning.”

Chicago’s Siyum was held in Agudath Israel of West Rogers Park, where Harav Avrohom Chaim Levin, shlit”a, Rosh Yeshiva of Yeshiva telshe-Chicago, made the Siyum. The Mara D’asra of Agudath Israel, Rabbi Moshe Scheinberg, shlit”a, spoke about how Succos symbolizes the mutual love between Hashem and the bnei Yisroel. Dedicating oneself to Daf Yomi is the practical manifestation of this love. Rabbi Avrohom Shimon Muller, shlit”a, a local Daf Yomi maggid shiur, made the has’chala on Maseches Yevamos- Seder Nashim.

In Cincinnati, approximately half of the local community members attended the Siyum. It was held at the Cincinnati Community Kollel, which features three Daf Yomi shiurim. The Siyum was held in conjunction with the Dirshu program’s Siyum on Maseches Kiddushin and one community member’s Siyum on Maseches Menachos. A vibrant 45 minute seder, which included a shiur on Hilchos Arba Minim by Rabbi Binyomin Travis, shlit”a, preceded the Siyum.

Rabbi Avrohom Weinrib, shlit”a, Rav of Congregation Zichron Eliezer, made the Siyum on Seder Moed, and offered inspirational remarks. His address was followed by an address by Rabbi Yitzchok Price, shlit”a, the Rosh Chabura of the Dirshu Chabura in the Kollel. “Everyone walked away with a very special feeling,” says Rabbi Weinrib.

Recordings of some of the presentations are available to the public by calling 212.797.9000×267 or emailing [email protected]