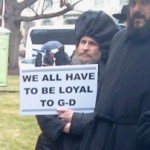 The following statement was released by the Agudah this afternoon following the President’s support of same-gender marriage: In the wake of President Obama’s sharing of his personal feeling that the millennia-old institution of marriage should be redefined in contemporary America, National Jewish Democratic Council chair Marc R. Stanley declared his admiration for the president’s demonstration of “the values of Tikkun Olam.”

A political group is entitled to its opinion, no less than a president is to his. But to imply that a religious value like “Tikkun Olam” – and by association, Judaism – is somehow implicated in a position like the one the president articulated, is outrageous, offensive and wrong.

We hereby state, clearly and without qualification, that the Torah forbids homosexual acts, and sanctions only the union of a man and a woman in matrimony.

The Orthodox Jewish constituency represented by Agudath Israel of America, as well as countless other Jews who respect the Jewish religious tradition, remain staunch in their opposition to redefining marriage. TLS.